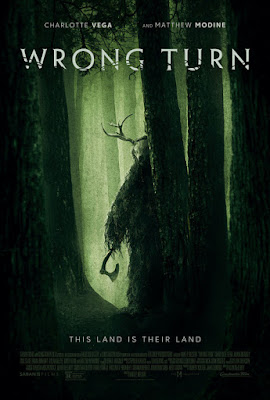 Horror movie fans know its bad when you hear: “you’re not from around here, are you?” Yet, to be honest, you probably aren’t being a particularly respectful visitor if you stand out so badly. Scott Shaw’s daughter Jennifer and her obnoxious millennial friends certainly stood out in Appalachia, so consequently Shaw must go off looking for them in Mike P. Nelson’s reboot of Wrong Turn, which releases today on VOD and DVD.

Jen Shaw was hoping to find herself on this trip, so good luck with that. Her boyfriend Darius Clemons is a history buff, so we can appreciate him. Unfortunately, he will also drag the group off the beaten trail in search of a Civil War fort. They have been hiking the Appalachian Trail with their gay couple friends Luis and Gary, so the group automatically assumes all the sidelong glances they get are homophobia (and have nothing to do with their hipster attitude). That is especially true of their pal Adam Lucas, who is openly disrespectful of the locals.

Of course, when they have an off-trail mishap, they find themselves contending with “The Foundation,” a deep-woods communal cult originally founded in 1859, in rejection of both the Northern and Southern factions. If you thought folks in town were standoffish, they really don’t take to outsiders.

The Wrong Turn movies (with their cannibal hillbillies) constitute a not particularly well-loved yet strangely prolific franchise with six films to its credit. It probably didn’t cry out to most horror fans for a re-upping, but on the other hand, Nelson and screenwriter Alan B. McElroy pretty much had a free hand to fiddle with the “mythology” without fear of alienating the faithful. As a result, they actually develop some interesting backstory and add some intriguing ambiguity. Strictly speaking, the hipsters were sort of asking for it—and maybe even get what they deserve.

Perhaps some of us horror fans are getting slightly less young than we used to be, but Matthew Modine is definitely the one we relate to, as Old Man Shaw. He is pretty grounded and believably driven. As usual, Bill Sage chews the scenery like the genre pro he is and he can carry off the antler-mask look as well as anyone. Charlotte Vega is also better than genre average shifting from annoying millennial to stone-cold survivor in the third act.

Diehard Wrong Turn loyalists might be upset that Nelson and McElroy down-play the cannibalism this time around, but the rest of us mere mortals will be just fine with it. Of course, it is still violent, exploitative horror film, but it over-achieves for what it is. Recommended for those who enjoy better quality trashy films, Wrong Turn (2021) releases today (2/23) on digital, pay-per-view, and DVD.
Posted by J.B. at 3:00 AM