Jazz on a Summer’s Day, on BluRay 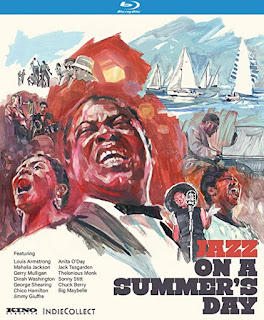 Louis Armstrong believed he was born on July 4, 1900. Subsequent historical research might suggest otherwise, but why get hung up on mere details? As a true Horatio Alger figure, who revolutionized both instrumental and vocal music, and represented America abroad as the unofficial “Ambassador Satch,” it is a symbolically fitting birthday for Armstrong. He was also a true road warrior, so he did not mind playing on his birthday weekend. Decades later, Armstrong and the other great jazz artists recorded in performance at the 1958 Newport Jazz Festival still sound as refreshing as a cool summer breeze in the BluRay release of Bert Stern’s Jazz on a Summer’s Day, which releases today.


1958 was a busy Fourth of July weekend for Rhode Island. In addition to George Wein’s Newport Jazz Festival, the America’s Cup qualifying heats were running off the coast. Part of Summer’s charm is the way director Bert Stern incorporates not just the races, but all the life and slightly inebriated carousing going on around the festival.

Jimmy Giuffre might not be widely known outside of jazz circles, but his performance of “The Train and the River” was an inspired choice for the opening credits. Breezy and bluesy with a hint of abstractness, it perfectly matches Stern’s images of the ocean and his wavy titles. This was Giuffre’s most accessible combo, a trio of himself on reeds, Bob Brookmeyer on valve trombone and Jim Hall on guitar (visible only when taking a bow at the end of the number). As many times as I have seen this film, this sequence always draws me in again.

In retrospect, it seems weird Thelonious Monk was scheduled so early in the festival. We see him playing to an apparently sparse audience that included an appreciative Gerry Mulligan, who would take the stage later that night. Monk’s unphazed performance of “Blue Monk” and VOA D.J. Willis Conover’s introduction might actually sound familiar, having been sampled years ago in a sneaker commercial.

Festival attendees were indeed fortunate getting a chance to hear future legends in sideman roles, the most unexpected being a young Roswell Rudd, later to become the most important trombonist in the avant-garde, seen in Newport careening around the roads with the Dixieland band Eli’s Chosen Six. We also get a rare opportunity to enjoy working bands that sadly never recorded outside of Stern’s film, like the group co-led by Sonny Stitt and former Kenton guitarist Sal Salvador (stuck with the dreaded “under-appreciated” appellation throughout his career), who blaze through “Loose Walk.”

A young Eric Dolphy also appears in a sideman role with Chico Hamilton’s band. Stern uses the Hamilton group as a touchstone throughout the film, juxtaposing their serious rehearsals with the revelry of the festival. The combination of the exotic sounds of Dolphy’s flute, Nate Gershman’s cello, the arresting dynamics of Hamilton’s drumming, and Stern’s gorgeous color photography is always a knockout punch, for newcomers and longtime fans alike.

Anita O’Day got a lot of attention for her sassy “Tea for Two” and “Sweet Georgia Brown” and Big Maybelle rouses the crowd with “I Ain’t Mad at You.” Of course, Chuck Berry wasn’t a jazz musician, but you would hardly know it from his jamming on “Sweet Little Sixteen,” with old school cats like Jack Teagarden, who would also appear with Armstrong. 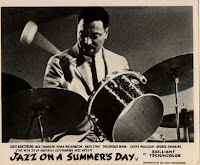 Yet, the biggest star was still Louis Armstrong himself, performing in the film’s penultimate timeslot for a clearly adoring audience. As he plays and relates anecdotes of hobnobbing with crowned heads of Europe for Conover, the film establishes him as uncrowned American royalty. After Armstrong’s Saturday night set finishes past midnight, Conover gives Mahalia Jackson probably the best stage introduction ever, ending Summer on Sunday morning with a gospel note.

Summer is a classic. You can watch it over and over and each time is like the first time. It is patriotic movie too. After all, it honors America’s only original art form: jazz—on our nation’s birthday. It looks great and sounds terrific. Very highly recommended, Jazz on a Summer’s Day releases today (2/9) on BluRay.
Posted by J.B. at 2:00 AM