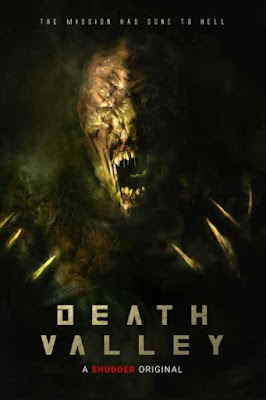 California’s Death Valley is in the Mojave Desert, but it is actually teeming with life. This film titled Death Valley takes place in a secret research facility hidden somewhere within a former Soviet Captive Nation, but it is filled with stupidity. The practical monster effects are cool, but nothing else makes much sense in Matthew Ninaber’s Death Valley, which premieres this Thursday on Shudder.

Obviously, vanity had nothing to do with Ninaber’s decision to direct himself in Death Valley, since he portrays the creature in the looked-down lab (that looks a little bit like the titular deranged space alien he also played in Psycho Goreman). Eventually, a team of mercenaries will come face to face with him, as part of an ill-advised and ill-fated mission.

They have been hired to extract Chloe, who just barely survived the prologue. However, they must first fight through a vaguely Balkan militia locked outside the facility before they can fight the monsters inside. However, the nature of the lab’s business and the aims of the militia outside might not be what their brief led them to believe. Isn’t that always the way?

One of Death Valley’s most conspicuous problems is it is rather difficult to tell our two primary mercs apart. Beckett and Marshall, played by Jeremy Ninaber (familiar name) and Ethan Mitchell, have different backstories. One of them is on the verge of retiring to spend more time with pregnant wife, while the other is the playboy team leader, but I honestly couldn’t tell you which is whom. They are both decent in the action sequences, but neither really distinguishes his character to any discernable extent.

Kristen Kaster is the class of the field as the freaked out, but yet unsettlingly suspicious Chloe. It really is actually a pretty good genre performance, especially since she does it with a lot of fake blood splattered on her (mostly that of others). Yet, the real stars are the makeup artists and practical effects designers.

This is definitely a Ninaber family affair, with Ninabers popping up throughout the cast and crew. It works relatively well on a pure meathead level, but we expected something more original from producers Cody Calahan and Chad Archibald, who teamed together on inventive films like Vicious Fun and The Oak Room. Just a so-so time-killer. Death Valley starts streaming Thursday (12/9) on Shudder.
Posted by J.B. at 5:30 AM