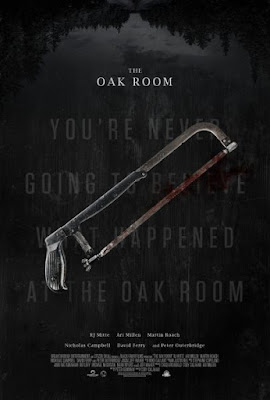 A guy walks into a bar. In this case, a duck does not tell the bartender to put the newcomer’s drink on his bill, but the man has a darkly ironic tale of his own to tell. Naturally, when the punchline finally comes, it is a real killer in Cody Calahan’s The Oak Room, produced by prolific Canadian genre director Chad Archibald, which screens again tomorrow during the 2020 Fantasia International Film Festival.

It has been years since Steve returned to his snowy hometown in the Canadian lake country, but Paul is still not happy to see him. Nevertheless, he indulges his late customer’s son, as Steve tells him a story of an unusual crime that happened in The Oak Room, a bar very much like Paul’s bar in a similar lake town nearby.

Of course, Paul will interrupt the tale with his own flashbacks and Steve’s perverse insistence in telling the story out of chronological sequence tries the barkeep’s patience, but it will eventually make sense from a cinematic perspective. Of course, to reveal much more than that would be telling.

Aesthetically, The Oak Room is very much in the tradition of 1990’s thrillers starring the likes of Steve Buscemi and Harvey Keitel that were promoted as something much more important than they really were, because of their indie status, but which we can better appreciate now for their lean and mean efficiency. Likewise, if you do not allow your expectations to snowball, you should be able to enjoy all the twists, turns, and reversals Calahan and company have in-store for the audience.

The small cast is terrific, including RJ Mitte doing some of the best work we’ve seen from him so far, as poor, awkward Steve. Peter Outerbridge nicely counter-balances him as the gruff and prickly Paul. Ari Millen, Martin Roach, and David Ferry keep us intrigued even though we’re confused during the anecdotal sequences. Plus, it is always a pleasure to see the great Nicholas Campbell (a.k.a. Dominic Da Vinci) pop up in a flashback as Steve’s father.

The Oak Room is a grungily unfussy thriller that could easily be repurposed into a stage play, but that is part of its old school charm. The set design and trappings are also pitch perfect. Both bars really look like places where you could order a beer and get lousy service. Highly recommended for fans of indie thrillers in the tradition of Things to Do in Denver When You’re Dead, The Oak Room screens again tomorrow (8/31), during this year’s Fantasia.
Posted by J.B. at 3:00 PM