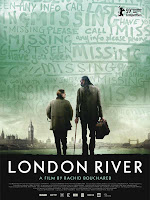 Nothing brings back the terrible memories of 9-11 like the sight of home-made missing person posters. Evidently, they were a common sight in London as well during the aftermath of the 7/7 bombings of 2005. One desperate mother hopes against hope that they will help her find her missing daughter in Rachid Bouchareb’s London River (trailer here), which screens as part of the 2010 African Diaspora International Film Festival in New York.

Elisabeth Sommers lives a quiet life tending her farm on the island of Guernsey. Estranged from his family in Africa, Monsieur Ousmane works as a forester in France. She is a protestant, while he is a Muslim, but they soon discover they are linked by the 7/7 bombing. Neither her daughter Jamie nor his son Ali has been heard from since that tragic day. Much to their surprise, it turns out their missing adult children were involved in a serious relationship. They were even learning Arabic together—a revelation Sommers has difficulty processing.

Eventually, the nervous Sommers and the stoic Ousmane form an uneasy truce that slowly evolves into something like friendship. Yet, the nagging uncertainty of their children’s fate looms over their time spent together.

River is a quiet film about every mother and father’s greatest nightmare. Bouchareb largely eschews the political in favor of the starkly intimate. Still, some realities are impossible to avoid. Does it give pause to any of River’s many Muslim characters that their co-religionists just murdered 52 innocent people? Perhaps the ever taciturn Ousmane hints at such misgivings when he confides in Sommers his own failings as a father. It is hardly a transcendent epiphany, but it is an honest, sensitively turned scene.

While River boasts a large cast, it is essentially a two-hander for two vastly different parents. The Oscar-worthy Brenda Blethyn is agonizingly convincing as the distraught Sommers, perfectly counterbalanced by the deliberate Sotigui Kouyaté as Ousmane. Chronically ill during the shoot, Kouyaté passed away earlier this year, but his Silver Bear at the 2009 for River was well-deserved. Though quiet and reserved, he brings Ousmane to life not merely as a stereotypical symbol of non-

western wisdom. Instead, he is a flawed individual, whose character arc is just as heavy as that of Sommers.

Though often a political filmmaker, the French-Algerian Bouchareb’s greater loyalties clearly lie with his story and characters. That is why his most recent film, Outside the Law, is such an interesting take on the Algerian independence movement, in which it devilishly difficult to differentiate the rebels from the gangsters. With River, he focuses like a laser on the pain and fear of his primary leads. Bouchareb also gets a nice assist from composer Armand Amar whose jazz-inflected score adds a wistful air to proceedings. A simple, moving film that deftly sidesteps polemics, River is a good way to start the 2010 ADIFF. It screens this Saturday (11/27) and next Thursday (12/2) at Anthology Film Archives, with a final showing the following Sunday (12/5) at Symphony Space’s Thalia Theater.
Posted by J.B. at 10:45 AM