Labored Film: Made in Dagenham

In the late 1960’s United Kingdom, trade unions dominated industrial policy, but did chauvinism trump class warfare? 187 women find out when their strike brings the mighty Ford plant to a standstill in Nigel Cole’s Made in Dagenham (trailer here), which opens this Friday in New York.

In one of the all time penny-wise-pound-foolish decisions, Ford reclassified the seamstresses working at Dagenham as “unskilled” rather than “semi-skilled” workers. This naturally resulted in a corresponding pay cut for the women. Encouraged by Albert, the factory’s union rep, they vote to authorize a work stoppage if their semi-skilled status is not reinstated. Though not previously active in the union or politics of any sort, Rita O’Grady is selected to attend the negotiations between Ford and their union. She is supposed to sit quietly in the corner, but when Monty Taylor, the feather-bedding head of their Local tries to sell out the Dagenham women, O’Grady gives them a case of what’s what.

Suddenly, the strike is on. However, the parameters have widened. With the encouragement of Albert, a former military officer raised by his single working mother, the Dagenham women are insisting equal pay for equal work. With 55,000 men now out of work, the union leadership is decidedly unenthusiastic. Ford is not too thrilled either. However, Barbara Castle, Harold Wilson’s minister for labor relations is quite impressed by the Dagenham women, while her boss is rather befuddled by it all.

Dagenham is a mostly harmless, Swinging Sixties Norma Rae, yet it veers awfully close to the patronizing attitudes it takes pains to skewer. We are clearly meant to cheer when O’Grady asserts herself with the sexist old boys around the negotiating table, but why shouldn’t she? William Ivory’s screenplay never actually uses the term “plucky gals,” but one can feel it floating in the air.

While Dagenham frames the issues surrounding the strike in simplistic terms, at least it earns credit for its pointed portrayal of the union leadership, a venal, Marx-quoting lot of chauvinist pigs. Of course, the overall membership is the salt of the earth, who eventually rally to the Dagenham women’s cause. Yet wisely, the film resists the dour naturalism of most union movies. Instead, it gives us Jaime Winstone in a mini-skirt.

Do not get the wrong impression though, Winstone (daughter of Ray) is mere window dressing. Dagenham is clearly intended as a star vehicle for Sally Hawkins. Certainly, she is “likable” enough. Everyone in the film is likable, unless they are management, in which case they are despicable. However, her soft-spoken, twitchy performance makes it hard to understand how she becomes such as a g 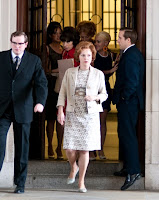 Granted, his big speech is ridiculously manipulative, but as the big-hearted Albert Bob Hoskins still sells it, supplying the film’s most heartfelt moments. Though Wilson incisively contrasted himself with his Conservative opponent’s aristocratic background during the 1964 campaign, John Sessions plays him like an upper-class twit, emasculated by a look from Miranda Richardson as Castle, but at least they also supply some dramatic flair.

It might be faint praise, but Dagenham could have been far worse. When it doubt, Cole clearly opted to keep the tone light, which makes the film watchable, if predictable and stilted. It opens this Friday (11/19) in New York at the Angelika Film Center.
Posted by J.B. at 3:45 AM