From Spare to Heir: The King’s Speech

Primogeniture can be a risky roll of the dice. Though 1936 was not a convenient year for a constitutional crisis, it afforded the United Kingdom an opportunity to correct a mistake of fate. Rumored to be a fascist sympathizer, Edward VIII’s abdication allowed for the ascension of his younger brother, subsequently known as King George VI, a former Royal Naval officer tailor-made to be a war-time monarch. However, well before he succeeded his brother, a persistent stammer complicated his official duties. A genuine prestige picture based on the true story of how Prince Albert, Duke of York found his royal voice, Tom Hooper’s The King Speech (trailer here) opens this Friday in New York after recently launching MoMA’s 2010 Contenders series.

Though overshadowed by his more dashing older brother, the future ex-king, Prince Albert always does his duty. Their father King George V might not be the warmest of parents, but he recognizes Albert’s greater substance, which is why he pushes him to take a more active role on behalf of the royal family. Unfortunately, this involves a fair amount of public speaking. After a number of excruciatingly painful addresses, the Prince reluctantly consults with Lionel Logue, a frustrated actor and unorthodox speech therapist.

At first, they seem to be a bad match, yet Logue is the only specialist who seems to get results. An unlikely friendship even starts to develop, but great challenges loom over the British Empire. His brother might have confidence “Herr Hitler” can satisfactorily “sort out Europe,” but Conservative backbenchers like Winston Churchill are much less sanguine. Further complicating matters, even after his brother assumed the throne, he continues carrying on with the scandalous Wallis Simpson, a twice divorced American of dubious repute.

Hooper, who previously helmed the vastly different historical drama The Damned United, shows a nimble touch with what could be dismissed as over-inflated Masterpiece Theater material. He starts Speech essentially as a three-hander, as Prince Albert, Lady Elizabeth (the future Queen Mother), and the somewhat eccentric Logue secretly meet in his working class quarters to tackle that stammer. Yet, it slowly unfolds to show the bigger picture of an England fighting for its very survival.

Although Colin Firth and Geoffrey Rush are essentially co-leads of equal weight, the Weinstein Company is reportedly positioning Colin Firth for best actor and Geoffrey Rush for best supporting actor, as King VI and Logue, respectively. Even in Hollywood, it is evidently good to be the king. Still, for most cinema patrons, this really just means Speech has the good fortune of two very strong central performances. Indeed, Firth perfectly personifies the stiff upper lip fortitude associated with the best of British royalty. Likewise, Rush gives his best performance since Shine, proj 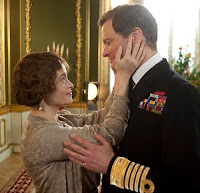 ecting “common” dignity as Logue. It is a performance of genuine humanity and of course, excellent elocution. Though not required to stretch as much dramatically, Helena Bonham Carter delivers some of the films sharpest quips with appropriate aplomb as Lady/Queen Elizabeth.

Not simply another British drawing room drama, Speech offers a portrait of nobility that lives up to its title. Gentle yet stirring, it is probably the best PR the House of Windsor has had in years. It is also one of the best films considered to be in contention for the upcoming award season. Highly recommended, Speech opens this Friday (11/26) in New York at the Lincoln Square and Union Square Theaters.
Posted by J.B. at 3:00 AM