Thursday is Thanksgiving, a time for families to come together. However, when an aging couple visits their grown children in Tokyo, the experience is more bitter than sweet. Time passes and generations drift apart as they always must in the films of Yasujiro Ozu. Indeed, his universally acknowledged masterpiece Tokyo Story (trailer here) is certainly no exception. The best known of his three “Noriko” films featuring Setsuko Hara as a dutiful daughter of said name, Story begins a special two-week run at the IFC Center this Friday.

Shukichi Hirayama and his wife Tomi live peacefully in a remote coastal village with their youngest daughter Kyôko, an unmarried school teacher. They rarely make the long trek to Tokyo where their eldest son Koichi and daughter Shige work. Though they never say so directly, this trip might be the last time they see them. They will also visit the Noriko, the ever-faithful widow of their middle son who was lost in the war. Unfortunately, the self-absorbed Koichi and Shige neglect their parents during their stay, while only Noriko makes time for her in-laws. Of course, the supposedly mature siblings will realize their short-sightedness, but only when the family reconvenes under sadder circumstances.

Tokyo is a film to make viewers fall in love with Setsuko Hara, either for the first time or all over again. Undeniably a beautiful woman, she radiates a warmth and humanity rarely seen on screen. Of the three Noriko films (also including Early Summer and the truly perfect Late Spring), Tokyo is Hara’s most heartbreaking role. Quiet but powerful and emotionally direct, it is one of the great performances in the history of cinema.

Those who partook of the IFC Center’s Ozu Weekend series will recognize many of his regular staple of players, besides Hara. Once again, Chishu Ryu is the gentle family patriarch, who displays the perfect lived-in comfort level with Cheiko Higashiyama (also the mother of Early Summer) as his wife Tomi. Haruko Sugimura also reappears as the tart-tongued Shige, the sort of role she specialized in for Ozu. Though not part of the unofficial Ozu repertory company, Kyôko Kagawa also is quite touching as the youngest namesake daughter.

Perfectly representative of Ozu’s style, Toyko features his usual landscape and cityscape transitions, as well as an atmosphere of calm resignation, even though society is in a transitional period. Yet throughout it all, post-war life just seems to be too harried for the senior Hirayamas. 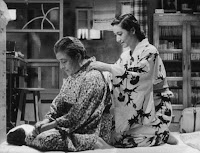 There seem to be a number of constants in Ozu’s films. Young boys are always bratty, the prospective of marriage is always complicated, and above all, Hara (particularly as Noriko) always gives a devastatingly heartfelt performance. Despite their similarities, each of Ozu’s family dramas has an infinite richness all its own. Perfect as a capstone to the IFC Center’s celebration of Ozu or as a neophyte’s introduction to the Japanese auteur, Toyko (note the new 35 mm print) opens this Friday (11/26) at the IFC Center.
Posted by J.B. at 3:00 AM