Most tourists believe they should spend a lot of time on Bourbon Street, because it is famous. Leave it to them. When you are in New Orleans, check out the clubs on Frenchmen and Decatur Streets instead. Frankly, Spencer Rabbit’s strip club is even sleazy than the worst of Bourbon Street, but he intends to expand. However, to do so, he will need to cash to pay-off the grossly corrupt police chief. He intends to raise his liquidity through a bank heist he is fronting, but two former lovers plan to complicate the scheme. Unfortunately, their complications get complicated in Nicholas Kalikow’s Carter & June (trailer here), which opens today in New York.

June O’Malley needs money for lawyers to contest an unfair custody decision. Carter Jennings needs money to prevent Rabbit’s goons from breaking his kneecaps. Together, the former romantic and scam artists partners agree to reunite to intercept Rabbit’s big score. Their inside person will be Rabbit’s inside person: a former stripper he managed to place in an assistant manager position. Her job is to distract the gunman in the safety-deposit vault, her latest conquest, while O’Malley and Jennings switch bags.

It was all supposed to be a sleight of hand job, but when the hold-up turns into a shoot-out, all bets are off. They still manage to make the switch, but now their fates are intertwined with that of Officer Jason Twitty, the beat copper who shot up the joint. The naïf should be easy to manipulate, but his unfaithful, grasping wife Darla Mae Twitty has been doing it longer than they have.

C&J starts out promisingly, with colorful characters and rude, decidedly un-PC humor, but it eventually dissolves into a conventional Tarantino knock-off. Yet, the real problem is the sheer dullness of the co-leads, especially when compared to the infinitely more interesting supporting cast. 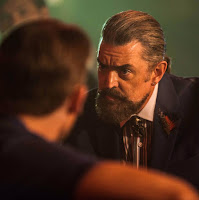 There is no denying Timothy Omundson cranks the snide b1tchiness up to eleven as Rabbit. James Landry Hébert certainly tries his hardest as poor Twitty, while James Moses Black (who was really terrific in Dark Meridian) does what he can as the moderately crooked Internal Affairs detective, Duke Johnson (the have quite a sliding scale for corruption in Nola). Alas, the film just can’t get much momentum going, because Michael Raymond-James and Samaire Armstrong are so lethally boring as the title characters.

There is a dab of Crescent City color in C&J, but there is plenty of room for more New Orleans music, culture, and style. That is actually a shame, because the genuine sights and sounds of New Orleans (and Cajun country up north) make anything more fun. Frankly, no Nola film should ever be this bland. Just kind of whatever, Carter & June opens today (5/18) in New York, at the Cinema Village.
Posted by J.B. at 7:00 AM