Irena’s pig farm could use a capitalist pig. The former state collective was once the envy of Lithuanian agriculture, but it has fallen on hard times in the immediate post-Communist years. Bernardas claims to be the white knight riding in on a red Cadillac, but his motives are more complicated than he lets on in Egle Vertelyte’s Miracle (trailer here), which screens during this year’s Panorama Europe at MoMI.

Irena knows pigs, but that just isn’t enough anymore. The farm is on the brink of collapse, the share-owning workers have not been paid in months, and most of the town is rooting for her failure, because they resent the perks she enjoyed during the old regime. Enter Bernardas. The rather eccentric first-generation Lithuanian-American wants to buy the farm, because of a supposed sentimental attachment. It turns out the farm was built on land confiscated from his parents.

Frankly, you might expect Bernardas would more likely harbor feelings of bitterness towards the farm, but beggars can’t be choosers. Indeed, as soon as he takes possession of the farm, he starts to act suspiciously disinterested. Irena could better understand the situation if she talked with the village priest more, but she still bitterly clings to her abrasive Communist-era atheism.

Bernardas has been widely interpreted as a Trump surrogate, which in fact, feels like a fair reading. (Yet, the expat is arguably a more complex character than his pseudo-analog.) However, there is more to the film than a deadpan skewering of capitalism. As the title suggests, there is also a level of Christian allegory that pays off much more profoundly (and for the record, there is not much nostalgia for Communism, either).

In terms of aesthetics and ideology, Miracle often suggests a kinship with the work of Swedish Marxist Ray Andersson, but it is dramatically more humanistic. The bold manner it addresses the mysteries of faith and suffering also calls to mind The Temptation of St. Tony from Estonia and Letters to Father Jacob from Finland. Arguably, the film challenges viewers to replace their false gods with the real one. Of course, it is not easy, but neither is pig farming. 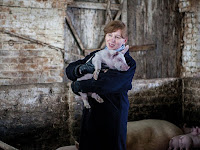 Egle Mikulionyte does indeed resemble the sort of severely reserved character found in the films of Aki Kaurismäki, or Heaven forfend, the uber-dry Andersson, but she also projects a keen sense of Irena’s closely guarded pain and insecurities. Ultimately, she is an acutely human and heroically dignified figure. Vyto Ruginis plays Bernardis as more than a bit of a blowhard, but he too is messily human and deeply sad. Yet, Daniel Olbrychski steals the show with understatement as the simple, patient priest.

So yes, watching Miracle requires a little faith. It pays off considerably, but it takes the long, indirect route to get there. Recommended for sophisticated viewers, Miracle screens tomorrow (5/5) during Panorama Europe, at MoMI.
Posted by J.B. at 6:30 AM