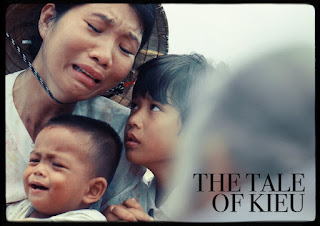 This short film was made possible by the “Anti-War” Movement and the Eighteenth-Century Vietnamese poet Nguyen Du. The Vietnam War is over, but the nation is not at peace—far from it. Millions of refugees (known as “Boat People” in the Western media) fled persecution from the victorious North, braving starvation, the elements, and the predatory violence of Thai pirates to start life again at zero in the West. A young boy will endure all such perils in Ray Leve’s short film, The Tale of Kieu, which screens during the 2019 Asian American International Film Festival.

It is not immediately clear why the film title alludes to Vietnam’s great epic poem, but it is safe to say water represents great danger in both. We watch a rag-tag boat of refugees ration their water as they bake in the sun—and then the pirates attack. It is a hard fate, but somehow hundreds of thousands managed to survive. If only they had a fraction of the media and NGO support marshalled for certain (but again, not all) refugees today, but they were a politically inconvenient reality for the so-called “peace movement” and their ideological allies.

Tale is an impressively well-made film. In fact, it was lensed by indie cinematographer extraordinaire Sean Price Williams. However, it views more like a scene taken from a longer feature instead of even a proof of concept short. While watching it, we definitely get the sense of prior events being alluding to and there is very definitely more to come for some characters.

Still, the quality of the production definitely leaves viewers wanting more. It is also a subject that deserves greater attention and commemoration. Maybe the last really significant film about the Vietnamese refugee experience was Ann Hui’s Boat People, a 1982 HK production starring a young Andy Lau.

Tale of Kieu is a visceral a jolt of historical memory and hopefully the start of something bigger. Recommended as an effectively constructed work of indie cinema and a conversation starter, it screens Tuesday (7/30), with the documentary Seadrift, as part of this year’s AAIFF.
Posted by J.B. at 10:00 AM