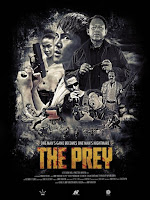 Joel McCrae in the original 1932 Most Dangerous Game film was the exception. The villains in every subsequent people-hunting movie always have a knack for choosing the worst possible quarry, like Jean-Claude Van Damme in Hard Target, Michael Dudikoff in Avenging Force, and Ice-T in Surviving the Game. Undercover Chinese cop Xin is cut from the same butt-kicking cloth. When he winds up in an off-the-books Cambodian prison, he will have to survive the warden’s special hunt in Jimmy Henderson’s The Prey, which had its Canadian premiere at the 2019 Fantasia International Film Festival.

Xin was working undercover infiltrating a gang of cyber-thieves targeting China when he was swept up in a local bust. Justice is swift in Phenom Penh, so he soon finds himself remanded to a remote jungle prison. Not surprisingly, his martial arts skills earn him a spot in the latest hunt the warden organizes for carefully selected customers. This time, his regular client Mat has brought along his fabulously wealthy but ragingly psychotic nephew “T,” so good times are sure to be had.

Of course, Xin will be gosh-darned difficult to kill. As a further complicating wrinkle, his Chinese colleagues will follow the tracking device in his confiscated Rolex, but they are definitely out of their element. Essentially, Xin will have to rely on himself—maybe getting a small degree of help from the thief who also survives the initial culling with him.

Yes, this kind of story has been done many times before. Some films have offered more interesting twists, but Henderson keeps it simple, preferring to rely on the action chops of newcomer Gu Shangwei. Fortunately, he has the moves and the grit, resembling a cross between Tiger Chen and vintage Jimmy Wang Yu.

Byron Bishop and Nophand Boonyai also make strong secondary villains, so viewers can anticipate plenty of cathartic payback. Italian expat Henderson never gets too fancy, but the legit rain forest settings definitely give it a humid atmosphere of authenticity. The Prey has been billed as Cambodia’s first million-dollar action movie, but its charms are really more that of grungy old school beat-downs. Easily recommended for straight-up action fans, The Prey had its Canadian premiere at this year’s Fantasia.
Posted by J.B. at 6:00 AM