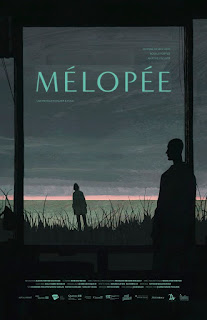 Arguably, no genre makes better use of sound to create atmosphere and tension than horror. Try to imagine The Exorcist without its signature sound design. Sometimes sound is the source of danger itself (as in The Sound and Pontypool). In this case, a little campfire music leads to a lot grave peril in Alexis Fortier Gauthier’s short Quebecois film, Mélopée, which screened during the 2019Fantasia International Film Festival.

Three millennials will be vacationing together in a beach house, but sensitive Olivier definitely looks the odd three’s-a-crowd man out, especially since he is obviously attracted to Diane, Guillaume’s girlfriend. However, she starts to give off hints his interest might be reciprocated. Nevertheless, she is still together with Guillaume, so there are times Olivier will not want to be in the house. Instead, he polishes a new song by the water, but beneath the surface, something listens—and it will start responding.

Believe it or not, Mélopée takes a borderline Lovecraftian turn, which is quite a jolt. Yet, it maintains a consistent tone. Stylistically, Mélopée could sit compatibly alongside so-called “post-horror” films like The Witch and Personal Shopper, but also takes care of genre business to sufficiently satisfy old school genre fans.

There is some wild design work in Mélopée. It is also nicely inclusive to have a deaf character among the primary trio—Diane, impressively played by Rosalie Fortier, whose warm presence makes an impression—but it also turns out to have a direct and surprising bearing on the narrative. Highly recommended for a broad spectrum of genre fans, Mélopée had its world premiere at this year’s Fantasia.
Posted by J.B. at 6:00 AM