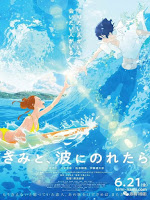 This case of young love is so sweet it could put you into a diabetic coma, but since it comes via anime, most of us will be okay with it. Hinako Mukaimizu and Minato Hinageshi are an obscenely cute couple, but their romance will be mixed with tragedy in Masaaki Yuasa’s Ride Your Wave, which had its North American premiere at the 2019 Fantasia International Film Festival.

Mukaimizu is already a legend on a surf board, but she is uncomfortable navigating life on dry land. In contrast, everything seems to come easily to Hinageshi, the dashing young fireman, except surfing. Both Hinageshi and his junior, Kawamura Wasabi, noticed Mukaimizu from afar, but it is Hinageshi who turns her head. Of course, he was at the right place, at the right time: rescuing her from her burning apartment building, on a fire department cherry-picker.

Things get serious quickly between them, but their happiness will be rudely interrupted by misfortune. Yet, somehow, they maybe find a way to stay together. In fact, there is a bit of a fantastical twist. Meanwhile, Wasabi and Hinageshi’s sister Yoko start playing larger roles in the drama.

Thematically, Ride Your Wave feels like a closer cousin to Naoko Yamada’s A Silent Voice than Yuasa’s previous films, even including The Night is Short, Walk on Girl. Regardless, it packs an emotional haymaker that rivals Your Name. This is definitely the kind of film that will give you the sniffles down the stretch. Yes, it is shamelessly sentimental, but it also lays a lot of character development ground work that pays off big time.

Yuasa’s aquatic motifs give him the opportunity for some delightfully colorful and splashy visuals. His “new adult” characters are also ridiculously attractive, as physical specimens and as sensitive young kids. However, Michiru Oshima’s groovy instrumental soundtrack and Generations from Exile Tribe’s candy-coated J-pop theme song really make the film so lethally effective.

It is refreshing to see a film that is so unabashedly romantic and utterly unapologetic about wearing its emotions on its sleeve. The surf and sun might bring to mind the 1960s Japanese “Sun Tribe” movies for some cineastes, but the earnest characters are a welcome rebuke to the sociopaths of Crazed Fruit and its ilk. This is a wholesome film, just like Mukaimizu (and surfer girls like Gidget and Annette Funicello before her). Highly recommended for fans of Japanese animation and beach movies, Ride Your Wave had its North American premiere at this year’s Fantasia.
Posted by J.B. at 3:00 AM