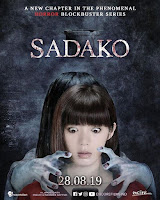 Somewhat ironically, the more successful a horror franchise gets, the trickier questions of canonical continuity become. That is certainly true of the Japanese Sadako/Ring/Ringu series. It has at least two separate continuity lines, as well as two Ju-on/Grudge crossovers and an early sequel TV series. That doesn’t even include the first Japanese TV movie that adapted Koji Suzukki’s source novel without much fanfare or the American and Korean remakes. Regardless, fans will be happy to see Hideo Nakata, director of the original Ring and Ring 2 (but not technically the second Ring film) return to the well (so to speak) with a freshened-up new jumping-on point (but not exactly a reboot), Sadako, which had its North American premiere at the 2019 Fantasia International Film Festival.

The poor little girl we immediately meet has endured an abusive childhood, not unlike that of Ringu’s Sadako Yamamura. In fact, her psychotic mother, Hatsuko Sobue, is convinced she is the reincarnation of Sadako, but before she can immolate the terrified girl, either Sadako or the would-be victim lights Sobue up, Fire-Starter-style.

The little girl is physically unscathed, but emotionally stunted in the extreme. It will be Dr. Mayu Akikawa’s job to draw out her young patient. However, she gets distracted when her aspiring YouTuber brother Kazuma vanishes after posting an urban exploration video of the burned-out Sobue apartment. Of course, weird things start happening around the hospital, but the epicenter of the madness will be a certain cave.

Instead of just warming up the Ring backstory in a microwave, Nakata and screenwriter Noriaki Sugihara broaden and deepen the Sadako mythology. The film is long on atmosphere and mostly disinclined to peddle in jump scares. The amber-glowing cinematography also gives the film an eerie otherworldly shimmer. Plus, the sound design is as unsettling as ever. 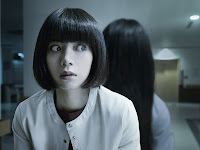 On the other hand, it is hard to believe Elaiza Ikeda’s deer-in-the-headlights Dr. Akikawa would have the wherewithal to mix it up with some kind of demon-spawn. Regardless, young Himeka Himejima deserves a great deal of credit for being heartbreaking vulnerable or legitimately terrifying, depending on the scene. Takashi Tsukamoto also provides a solid Fox Mulder to Akikawa’s Scully, with his portrayal of Yusuke Ishida, her brother’s publicity consultant. Plus, Hiroya Shimizu is painfully credible as the cringe-worthy Kazuma.

A lot of reviewers have uncharitably slammed Sadako as merely a collection of J-horror staples, but what did they really expect? The truth is Nakata established a lot of those conventions, so he is entitled to rip himself off. Regardless, it is definitely creepy, in a vintage 1990s J-horror kind of way. Recommended for fans or as an introduction to J-horror, Sadako had its North American premiere at this year’s Fantasia.
Posted by J.B. at 9:00 AM