Agatha and the Truth of Murder: Christie’s 11-Day Mystery 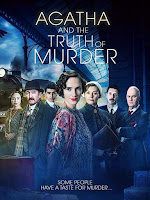 Agatha Christie remains so beloved by her public, we still can’t help wondering where she got off to during her mysterious eleven-day disappearance. It served as the inspiration for the 1979 film Agatha that suggested Dame Agatha was researching methods to kill her unfaithful husband’s other woman. That was not so satisfying for fans, especially since she was played by Vanessa Redgrave, an outspoken supporter of the anti-Semitic PLO terrorist syndicate. This is take #2. This time around, Ms. Christie slips away from her personal drama to solve a murder mystery in Terry Loane’s Agatha and the Truth of Murder, which is scheduled to release on iTunes today.

It is relatively early on in Agatha Christie’s celebrated career, but she is already feeling pressure to keep surprising her readers. She even seeks out the advice from her crusty old colleague, Sir Arthur Conan Doyle (yes, their professional careers really did overlap). However, the old blowhard isn’t much help. Frankly, her creative problems are really rooted in her marital problems, which Col. Christie wants to solve with a divorce. Of course, the wronged writer has no intention of giving him such an easy out. She also still thinks she loves him.

The future Dame is not very gracious when retired nurse Mabel Rogers comes seeking her assistance to solve the six-years-cold murder of her best friend, Florence Nightingale Shore, who really was the god daughter of Florence Nightingale and was very definitely bludgeoned to death on a train bound from London to Brighton. Despite her own domestic turmoil, Christie becomes fascinated with the crime and eventually agrees to apply her deductive talents to it.

Fittingly, she hatches a risky scheme, in which the five leading suspects will be summoned to a remote country estate on the pretext of a potential inheritance, allowing the great mystery writer to examine them while pretending to be an agent of the estate solicitor. Alas, her plan starts to implode when one of the suspects turns into a victim.

Screenwriter Tom Dalton cleverly fuses together the two historical mysteries of Christie’s disappearance and the murder of Nightingale Shore. The problem is the first act is downright pokey, wasting a lot of time on awkward character development that is already established for most mystery fans. On the other hand, the country manor business stays pretty true to the spirit of Christie’s books.

Ruth Bradley (from Grabbers) is okay as Christie, but it is definitely a portrayal that emphasizes her cerebral nature over any sense of her charisma. Fortunately, the film gets a boost of energy from Ralph Ineson (probably best known for The Witch) playing the perceptive Detective Inspector Dicks. The truth is Scotland Yard detectives fared better in Christie’s work than many of her contemporaries (including Conan Doyle), with Superintendent Battle appearing (favorably) in five novels and DS Trotter eternally solving the case in The Mousetrap. Recognizable character actor Tim McInnerny also chews some scenery in quite the appropriate manner as Randolph a relative of Nightingale Shore and a suspect in her murder.

Truth of Murder definitely looks like the British TV movie that it is, but that is not necessarily a bad thing. It is a decent mystery and could become a credible franchise, if Ineson returns as Dicks. Regardless, it is way more fitting and respectful way to remember Dame Agatha’s tremendous talents than other films we could mention. Recommended for fans of British mysteries, Agatha and the Truth of Murder hits iTunes today and is already streaming on Netflix.
Posted by J.B. at 6:00 AM