The Romanians: The Earth’s Most Beloved Son 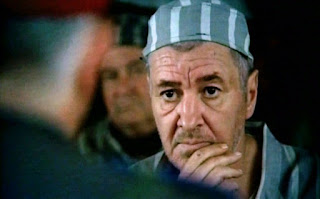 By and large, agents of the Securitate, Communist Romania’s secret police, had no sense of humor. Nobody understands this better than Victor Petrini. The philosophy professor will be sentenced to ten years in a political prison camp thanks to the deliberate and willful misinterpretation of a joke. His story was first told in Marin Preda’s novel, but it was withdrawn from circulation shortly after publication. Preda’s own death soon followed, stoking the suspicions of many. The release of the film adaptation was therefore quite a significant milestone, after the fall of Ceausescu. Serban Marinescu never sugar-coats any of the pain or humiliations of life under the Communist regime in The Earth’s Most Beloved Son, which screens as part of Film Forum’s The Romanians: 30 Years of Cinema Revolution.

For about ten seconds, Petrini has it all: a comfortable flat, the respect of his peers, and young trophy-ish wife. Then there comes a knock at the door—and poof, all gone. Naturally, his arrest involves violent manhandling, but the first interrogator takes a “good cop” approach. The surveillance apparatus intercepted a letter to Petrini from a colleague abroad and out of favor with the regime, which includes a reference to the catch-phrase from their old collegiate comedy act. Needless to say, the Securitate does not get it. Petrini refuses to confess and he has no names to name, so the interrogator’s superior unceremoniously condemns him to a gulag.

Survival there is a rough business. In fact, Marinescu depicts the realities of Socialist prison life in such a brutal, in-your-face manner, Beloved Son created a mini-firestorm of controversy in Romania when it was first released. Let’s just say Petrini’s experiences are akin to the roughest stuff in Oz and Sleepers, but he eventually fights back. The philosophy professor gets tough because he must be to survive, even after he is released.

Probably over half the film is dedicated to Petrini’s post-prison life. As a former political prisoner, he is at the mercy of hostile apparatchiks and plagued by venomous informers. His family and now ex-wife Matilda are definitely not there for him, but he will still try to find some grace in life.

Beloved Son would make an excellent pairing with Lucian Pintille’s The Oak. Both were produced in the early 1990s and present an emotionally devastating critique of the Communist system, but where The Oak is a hallucinatory Grand Guignol, Beloved is painfully grounded. Yet, it also has epic sweep, spanning decades of oppression.

As Petrini, Stefan Iordache covers the emotional waterfront and travels a roller-coaster-like arc of character development, from smug to broken to righteously furious to resignation, with maybe a pinch of hope sprinkled in occasionally. The pedantically inclined might notice he stays roughly the same age over all those hard years, but it does not matter. It is just a great, boldly messy, and ultimately unpredictable acting showcase. Likewise, it is also impossible to forget Maia Morgenstern (star of The Oak) who fearlessly dives into some of the most visceral scenes you will ever see on film as the faithless Matilda.

In some sense, Beloved Son can be seen as a form of cinematic primal scream therapy, but it also shares a kinship with classical tragedy. The narrative is compelling, while Iordache’s lead performance is uncompromisingly humanistic and complicated. Very highly recommended as cinema and cultural history, The Earth’s Most Beloved Son screens Monday (11/25) and Tuesday (11/26), during the final days of the Romanians film series, at Film Forum.
Posted by J.B. at 3:00 AM