The bass is really quite a fitting instrument for a Buddhist jazz musician. It can create a drone-like effect, especially if played arco. Yet, more importantly, the bass provides the selfless foundation that the rest of the ensemble plays over. Bassists frequently comp under soloists and generally “keep the band together,” to quote the words of Buster Williams. He ought to know. Williams played with everyone and has become a popular bandleader in his own right. Viewers get to hang with the virtuoso bassist in Adam Kahan’s Buster Williams Bass to Infinity, which premiered at this year’s DOC NYC.

Williams played with undeniable legends, like Miles Davis, Nancy Wilson, and Sarah Vaughan. However, his first professional stint came in the ruckus band co-led by “Boss Tenors” Sonny Stitt and Gene Ammons. It was quite an education for the young Williams, as viewers learn from his colorful anecdotes and the lively animated sequences that accompany them.

Most of the film is more conventional and laidback, but it slyly builds to a significant point, appropriately delivered by NEA Jazz Master Herbie Hancock, whose Buster Williams story perfectly represents and encapsulates the film. Disappointingly, we do not get to hear Hancock play with Williams (oh well), but we do hear the bassist perform with famous friends, such as tenor-player Benny Golson, vocalist Carmen Lundy, pianists Kenny Barron and Larry Willis, fellow bassist Rufus Reid, as well as his own ensemble featuring Steve Wilson and George Colligan, so that’s definitely something.

Buster Williams is a likable screen presence throughout the film. Oddly enough, Infinity could be the best opportunity to hear Williams on his own, because he never hogs the solo spotlight, even at his own gigs. He really takes the business of “keeping the band together” seriously. But of course, his musicianship is undeniably accomplished. 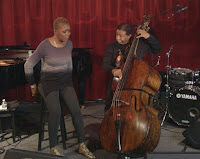 Kahan’s approach also sneaks up on the audience. Initially, he seems to be trying to capture the vibe of musician hangs and informal sessions. Yet, Infinity turns out to be a highly spiritual documentary. He makes the transition seamless (even stealthy), but he admittedly gets significant assistance from Hancock and Williams.

Great credit should also go to the sound crew, because you really can hear Williams’ bass (miking them can be tricky, as most recordings not led by bassists can attest). It is a good showcase that gives viewers a vivid sense of Williams’ personality and chops. There is a lot of good humor and good music here. Highly recommended for jazz fans and the Buddhist-curious (how perfect is this film for the Rubin Museum), Buster Williams Bass to Infinity screens again tomorrow (11/14), as part of DOC NYC 2019.
Posted by J.B. at 3:00 AM