DOC NYC ’19: What We Left Unfinished

It is estimated the Taliban destroyed 200-300 Afghan motion pictures during their oppressive misrule. That is indefensibly horrifying, but at least it was not the complete and total destruction of Cambodian cinema wrought by the Communist Khmer Rouge. Ironically, five of the films that survived were incomplete Soviet occupation-era propaganda movies that will remain unfinished, because the featured actors have long since aged out of their roles or passed away. Veterans of the Afghan film industry contemplate its tumultuous past and uncertain future through the lens of these films in Mariam Ghani’s documentary, What We Left Unfinished, which screens today at DOC NYC 2019.

The films spanned a period from 1978 to 1991 and all had mostly wrapped their principal shoots, but they were halted due to regime changes, political infighting, and civil strife. Daoud Farani’s The April Revolution even featured the current General Secretary-Strongman Hafizullah Amin playing himself in the hagiographic biography he also wrote. Alas, his Soviet sponsors turned on him after three months, prompting the assassination that cut short the production.

There is no question Farani’s interrupted film is the most interesting of the quintet. To a large extent, Faqir Nabi’s Downfall, Khalek Halil’s The Black Diamond, Juwansher Haidary’s Wrong Way, and Latif Ahmadi’s Agent all have a similar look and feel, having been shot between 1987 and 1991 and feature tales of evil Westerners and heroic Afghan cops from the drug enforcement and counter-espionage squads. Think of the roughest, cheapest South Asian films you have seen and then try to envision them even more stilted.

Ghani takes a quiet, meditative approach, but her film lacks the emotional wallop of Davy Chou’s Golden Slumbers, his documentary elegy for Cambodia’s cinematic heritage, which is the obvious comparison film. Ghani’s participants are also in an awkward position of admitting they accepted Communist regime funding and were very definitely expected to tow the Party’s line (although some claim they still stayed true to reality and their creative visions). 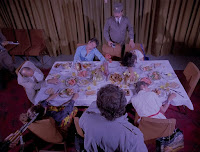 One veteran actress sums the matter up quite aptly—under Communism they had great resources at their disposal, but could not deviate from the Party’s official message, whereas today they can say whatever they like, but they have zero funding. Admittedly, there will be a lot of growing pains for the Afghan film industry as it rebuilds itself, but in the long-run, they will find the latter is a better situation to be in.

There are plenty of dramatic visuals culled from the “Unfinished Five” and the doc in general casts a light on the cultural impact of totalitarianism, whether it be the socialist or Islamist varieties. Still, even at an economical 71 minutes, Ghani and editor Ian Olds (who helmed the surprisingly compelling noir Burn Country, a.k.a. The Fixer, and co-directed the utterly unwatchable Francophrenia) could have tightened it up more. Regardless, What We Left Unfinished is a worthy look at the human cost of collectivist ideology. Recommended accordingly, it screens tonight (11/7), as part of this year’s DOC NYC—and Tuesday (11/12) during the San Diego Asian Film Festival.
Posted by J.B. at 3:00 AM