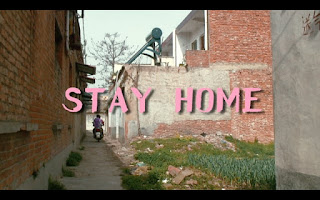 Recent revelations of toxic tear gas dispersed throughout Hong Kong and the network of concentration camps imprisoning hundreds of thousands of Uyghurs from East Turkistan prove the Chinese Communist Party is dangerous to human health. AIDS activist Liu Ximei knew that years ago. She was one of the thousands of Henan peasants who contracted the disease through tainted transfusion blood. However, she was not willing to meekly accept the substandard treatment grudgingly provided by state clinics. She organized patients, but that consequently made her a target, as viewers can see in Ai Weiwei’s Stay Home (written, lensed, and edited by Chen Shuo), which predates Andy Cohen & Gaylen Ross’s more complete documentary Ximei, but it still nicely compliments their film, which opens today in New York.

Hip New Yorkers may have already seen Stay Home, because the 2013 film played on a loop during Teacher Ai’s retrospective at the Brooklyn Museum. It is also readily available on YouTube and Vimeo, if you do not live on the Chinese side of the CCP’s Great Firewall.

Stay Home is somewhat less structured and more fly-on-the-wall in the manner it documents the day-to-day health challenges Liu must endure. It also covers a shorter time-span, ending before she becomes a legit couple with her roommate, a fellow AIDS patient. We also witness worse acts of harassment in the newer documentary, because the Henan cadres had the good sense to be on their best behavior when Ai Weiwei showed up with a camera crew. In contrast, Cohen and company do their best to stay undercover. Nevertheless, the apparatchiks’ hostility and resentment for Liu still comes through clearly.

Even with the Cohen-Ross film now opening, Ai’s Stay Home would still be a significant cinematic expose. It first brought Liu to the attention of the world and vividly captures the circumstances of her life. Teacher Ai’s closing titles also make an important point, explaining how China’s notorious One Child policy contributed to Liu’s tribulations.

Stay Home is a snapshot in time. Things are very different for Ai Weiwei since it was filmed, somewhat different for Liu, and not at all different for thousands of Henan peasants struggling with social scorn and a scandalously low level of care. Stay Home is recommended as an easily streamable introduction to Liu and the Henan AIDS transfusion tragedy, while Cohen & Ross’s Ximei (executive produced by Ai himself) is very highly recommended as a profile in courage and an indictment of the CCP’s callous contempt for human life.
Posted by J.B. at 3:00 AM