The Original Most Dangerous Game

Richard Connell’s frequently anthologized short story finally went into the public domain this year, but it has been ripped off for decades. Tell me if you have heard this one before: there is a bad guy who enjoys hunting people for sport. It is not just Bacurau that just opened or The Hunt due to be released this week that “borrowed” this idea. There has also been Hard Target, Surviving the Game, 31, Preservation, Black Rock, Carnage Park, Turkey Shoot (and its remake, Elimination Game), The Tenth Victim, and The Prey that basically riffed on the same people-hunting-people gimmick. That makes this an opportune time to revisit the film that (officially) adapted Connell first, way back in 1932: Irving Pichel & Ernest B. Schoedsack’s The Most Dangerous Game, which airs tomorrow on TCM, for those of you in quarantine.

Dashing young celebrity big-game hunter Robert Rainsford was enjoying a cruise with friends until their yacht foundered on the reef surrounding a remote island. It turns out the captain was correct to suspect the safety buoys had been moved. Alas, that would be the late captain. Only Rainsford eludes the sharks swarming their wreck, making it to shore, where he stumbles into the gothic fortress of Count Zaroff.

At dinner, he meets Eve Trowbridge, another shipwreck survivor, who took refuge with the Count, along with her drunkard brother Martin and two sailors that are now suspiciously missing. Since the Count recognizes the famous Rainsford, he invites him to join him hunting “the most dangerous game.” Of course, that would be man. When the horrified Rainsford refuses, he is forced to become the prey instead. The stakes will be particularly high for this hunt. If Rainsford survives until sunrise, he wins his life and the right to leave with Trowbridge.

Dangerous Game was produced “pre-Code,” but it is still pretty cagey when it implies what Zaroff intends to do to the lovelly Trowbridge once he bags Rainsford’s head, but it is pretty easy for modern audiences to infer. However, the film’s pre-Codeness is vividly clear in the early grisly engine room deaths we see when Rainsford’s ship goes down, as well as the trophy heads Zaroff keeps in bell jars. This is an old movie, but for genre fans, it is surprisingly cool.

Frankly, Joel McCrea should be better remembered than he is. In his day, he was a big movie star, whose charisma could carry a film. He also had sufficient comedic timing to hang with Robert Benchley in the criminally under-appreciated Hitchcock film, Foreign Correspondent. Being the leading man is rather thankless business in a film like this, but McCrae is admirably energetic as Rainsford. He also has some decent screen chemistry with Faye Wray. 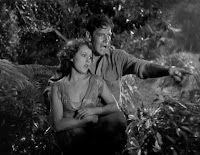 Even though she was known as a the original “scream queen,” Wray plays Trowbridge with more assertiveness than you would expect for the era. It is also interesting to see her appearing as brother and sister with Robert Armstrong, with whom she would co-star a year later in the absolute classic, King Kong (which Schoedsack co-directed with Merian C. Cooper, who co-produced Game). Armstrong still does not get the credit he deserves as the larger than life adventure filmmaker Carl Denham in Kong, but he is a bit shticky as Martin Trowbridge, who could pass for the Thin Man’s more alcoholic cousin. However, Leslie Banks is way too restrained for an arch-villain like Zaroff. Had he been played by Karloff or Lugosi, Dangerous Game would be screened much more regularly today.

Nevertheless, Carroll Clark’s art direction looks terrific, especially Zaroff’s sinister castle-keep. Pichel & Schoedsack (who is really due for a retrospective) really keep things moving along at a gallop, considering the film runs just over an hour. It is a classic that has probably been riffed on, imitated, and stolen from more than any other film released in 1932. Recommended as an old-fashioned chiller-yarn that is still better than most of its illegitimate progeny (that is especially true of Bacurau), The Most Dangerous Game airs tomorrow afternoon (3/9) on TCM.
Posted by J.B. at 3:00 AM