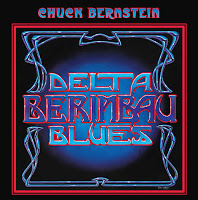 It started with the late great Shelly Manne. When Chuck Bernstein heard his friend and fellow jazz drummer perform on the berimbau, a single-stringed traditional Brazilian instrument, he was immediately intrigued. Simply finding a berimbau proved to be quite a trick, but it was the epiphany linking the Brazilian instrument to its distant cousin, the so-called “diddley bows” or rudimentary bowed wires of early country blues that directly inspired Bernstein’s latest CD, Delta Berimbau Blues.

Bernstein is probably best known as the drummer in the Monk’s Music Trio (MMT), a Bay Area combo dedicated to interpreting the compositions of Thelonious Monk. While Bernstein once integrated the Berimbau into a MMT arrangement, with DBB he travels deep into the delta for a blues session, by way of Brazil and the African Diaspora. Through his special tuning and custom-treated bow, Bernstein proves the berimbau’s natural kinship with blues slide guitar, as on the downright spooky opening title track, recorded with guitarist Greg Douglass (formerly of the Steve Miller Band).

Such pairings of blues guitar with the drone-like sound of the berimbau make for the strongest tracks of DBB, like the gently melodic “All Your Desires,” featuring the lead guitar of Paul Ledo and the rhythm guitar of Brazilian Ricardo Peixoto. Particularly effective are “Drop D” and “Kelley Blues,” Bernstein’s eerie standout duets with “Sister” Debbie Spies.

While Bernstein’s solo tracks and duets with percussion certainly convey a primordial blues sensibility, they all have a somewhat similar raga-like sound and do not really stand out from each other. Here it just seems like the berimbau benefits from the presence of a strong foil. Jazz trombonist Roswell Rudd certainly qualifies as that, lending some gut-bucket to “Plunger in the Funk.” “Contenda” also has a pronounced jazz vibe, featuring the tenor saxophone of Robert Kyle, the longtime music director for blues singer Linda Hopkins, and seventeen year-old Brazilian guitarist Ian Farquini. DBB concludes with another Douglass duet on the appealingly relaxed “Flight of the Golden Dragon,” that is a surprisingly accessible track by any standard of measure.

It is always interested to hear a jazz musician take a fresh direction, and Bernstein certainly does that here. Overall the results are quite rewarding. While it might sound like a novelty recording for the Martin Denny set, many tracks—particularly the blues guitar collaborations—have an immediacy and vitality that is legitimately compelling.
Posted by J.B. at 10:39 AM