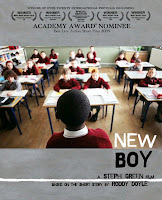 It is a film based on the work of Roddy Doyle, bestselling author of The Commitments, which many probably have not heard of, despite receiving an Academy Award nomination this year. That is because it is a dreaded short subject, one of those unheralded awards that are dispensed with early in the Oscar broadcast. New Yorkers now have another chance to see writer-director Steph Green’s New Boy, based on a Doyle short story, at the New York International Children’s Film Festival, as part of their second program of short films.

It is young Joseph’s first day in a new school and it is conspicuously obvious he is not Irish. Derisively called “Live Aid” by one of the school’s Hellions, he is clearly in for a long day. On the plus side, the feisty class brain, Hazel O’Hara, clearly takes a real shine to him. In between class-work and standing up to bullies, Joseph flashes back to his tragic final days in Africa, when the war and strife of the outside world roughly intrudes into the loving shelter of his school.
Olutunji Ebun-Cole and Sinead Maguire display enormous screen charisma, as Joseph and Hazel respectively. Spending an entire feature-length film with them might be enough to induce diabetes, but in New Boy’s brief but diverting eleven minutes, their charm is undeniable. While the characters of Joseph’s would-be tormentors and clueless new teacher are not nearly as sharply drawn, New Boy’s brevity probably necessitates a certain reliance on stock characters.

Cinematographer P.J. Dillon’s rich, warm visual style serves the heartfelt film quite well, particularly during the light saturated flashback scenes. Although the narrative does not really hold any earth-shattering surprises, the final payoff is reasonably satisfying. The real attraction in New Boy though is its winning lead performance from Ebun-Cole and Maguire’s effective supporting turn. If not as rich a film as Toyland¸ the 2009 Oscar winner for live-action short, New Boy is an entertaining little film, which screens at the NYICFF tomorrow, Sunday, and Saturday the 14th.
Posted by J.B. at 2:34 PM