Gene Tierney in Leave Her to Heaven

Gene Tierney was the ultimate Hollywood femme fatale. One glimpse of her portrait was enough to bewitch Dana Andrews’ hard-boiled police detective in Otto Preminger’s 1944 classic Laura. The next year, Cornel Wilde would fall for her hard during a chance encounter, but would soon rue that fateful day in John Stahl’s Leave Her to Heaven (trailer here), which opens this Friday at the Film Forum, in a newly restored 35M print.

When author Richard Harland notices the beautiful Ellen Berent reading his latest novel on a train to New Mexico, his attempts to charm her seem to fall woefully short. However, she sees a resemblance between him and her late father and before you can say “Sigmund Freund” Berent has dumped her fiancé and announced their engagement (much to Harland’s surprise). This would be the second film in which Gene Tierney breaks off an engagement to Vincent Price, but he takes it much harder here as District Attorney-candidate Russell Quinton, than as the social climbing adventurer Shelby Carpenter in Laura. In fact, Quinton remains under Ellen’s toxic spell, setting up a wildly over-the-top courtroom climax that frankly makes no legal sense, but comes far too late in the saga for viewers to be concerned with such trifling details. 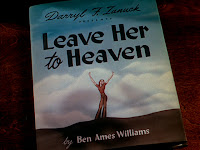 It seems safe to say Berent has father issues. “There’s nothing wrong with Ellen,” her mother explains, “It’s just that she loves too much.” However, when Berent shifts the focus of her obsessive attention from her father to Harland, her jealousy starts to manifest itself in disturbing behavior. While outwardly angelic, she will sacrifice anyone who could conceivably come between her and Harland, most certainly including his endearing younger brother Danny, currently undergoing extensive physical rehabilitation for an unspecified disability.

At times, Leave is laugh out loud outrageous, approaching perilously close to camp, as Tierney unrepentantly chews the scenery, in the tradition of Bette Davis and Joan Crawford. She might be hot, but at heart, she is a stone-cold sociopath, whose manipulations are vastly entertaining. While the film boasts a great supporting cast, including Jeanne Crain as her pure-hearted adopted sister and Ray Collins (whose credits include Citizen Kane and Perry Mason) as the family lawyer, it is Tierney’s film. She is an amoral force of nature, but with a hint of vulnerability that nearly captures our rooting interest (considering how pathetic Harland turns out to be).

Leave has many critical champions, such as Martin Scorsese, but they are often at a loss to categorize its genre. Terms like “Technicolor Film Noir” are often bandied about, given its vibrant colors and wide open spaces. Indeed, Leon Shamroy’s cinematography gives it a big, bold look and the set design of the New Mexico ranch could be described as western baroque. More than anything, Leave is high melodrama that takes perverse glee in its scandals, carrying the audience along with it. Ultimately, the film is just great fun, having survived long enough as a guilty pleasure to now be considered a classic of Hollywood’s golden age. It screens at Film Forum for a week, starting this Friday (3/6).
Posted by J.B. at 3:20 AM