New Music from the Hot Clubs of the World 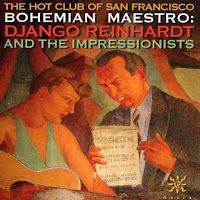 Bohemian Maestro: Django Reinhardt and the Impressionists
By the Hot Club of San Francisco

The Belgian Roma guitarist Django Reinhardt easily remains the most influential European artist in the history of jazz. His sessions with the original Quintette du Hot Club de Paris, with Stéphane Grappelli on violin and brother Joseph as one of two rhythm guitars, still inspires guitarists of all genres, resulting in the world-wide proliferation of “Hot Club” combos playing Reinhardt inspired jazz. There are Hot Clubs of Sweden, Hungary, New Orleans, Detroit, Las Vegas, and even Spokane. Some have developed international reputations through Django festival appearances and recordings, including The Hot Club of San Francisco and the Hot Club de Norvege (Norway), who have recently released Bohemian Maestro and Django Music respectively.

Very definitely on the Parisian scene during the Impressionist period, Django Reinhardt and the Hot Club often performed for and occasionally jammed with Maurice Ravel. Jumping off from that point, the Hot Club of San Francisco (HCSF) pays tribute to their inspiration with Bohemian Maestro, an ambitious program of Reinhardt’s influences, the contemporary sounds of his era, and the Roma maestro’s little known compositions that illustrate an affinity for classical, particularly Impressionist music.

Bohemian starts with two originals that channel the Django spirit, particularly the brief opener, “Le Surdoue,” which lead guitarist Paul Mehling pieced together from Reinhardt’s melodies and improvisations. In tribute to Ravel, the HCSF add classical pianist Jeffrey Kahane (music director for the Los Angeles Chamber Orchestra and Colorado Symphony Orchestra) for a fleet rendition of Reinhardt’s “Vendredi 13,” as would befit a spontaneous club jam. Kahane also joins the HCSF on the more relaxed “Diminushing Blackness,” a tune Reinhardt once recorded under the title “Go Tell Mozart,” getting a chance to stretch out nicely with an elegant solo statement.

Reinhardt was eight years old when Claude Debussy died, so it is safe to assume they never jammed, but as a longtime resident of Paris, the HCSF reasonably assumed his familiarity with Debussy’s music, mixing into the program two brief but evocative extracts from “Pour L’Egyptienne” and a sensitive rendition of “Clair de Lune,” all which spotlight Evan Price’s expressive violin.

The HCSF expands the sonic range by adding the woodwinds of the Aeros Quintet for two Reinhardt compositions originally written for large ensembles. “Nympheas” was originally a big band piece, which the HCSF speculates may have been inspired by Monet’s “Water Lilies.” The woodwinds give it a warm lushness, while Mehling’s guitar solo is appropriately thoughtful. The Aeros Quintet is also featured front-and-center on “Messe,” Mehling’s transcription of the surviving overture from Reinhardt’s lost mass for the Roma, before segueing into Reinhardt’s so-called “Improvisation.” It is a lovely performance in a rich and inventive tribute.

The Hot Club de Norvege (HCN) has also recorded some more ambitious Reinhardt tributes, but in Django Music they largely return to the essentials of Djangology. After a “meh” of a vocal opener with “I Can’t Give You,” they settle into the Reinhardt repertoire with a swinging “Blue Drag.” “Nuages” and “Tears” are absolutely indispensible for any Django greatest hits collection, and the HCN does right by them both, with violinist Finn Hauge’s harmonica particularly effective capturing their sophisticated melancholy.

While more traditional than the Villa-Lobos and Poulenc of the HCSF’s Bohemian, the HCN still includes some adventurous tune selections, like the traditional Jewish songs, “Joseph, Joseph” and “Davi 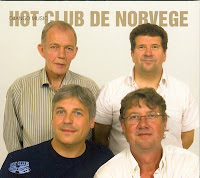 d,” which give an idea how Reinhardt’s Hot Club might have approached the Benny Goodman hit “Bei Mir Bist Du Schoen.” However, their most inventive and rewarding Hot Clubbing of a tune is “Danse Norvegienne” from their homeland. After an exotic (almost Celtic sounding) opening dominated by Hauge’s violin, guitarist John Larsen brings it back to gypsy swing, soloing eloquently while Hague maintains the Scandinavian vibe.

Larsen, second guitarist Per Frydenlund, and bassist Svein Aabostad have been playing together since 1979 (with Hauge the relative newcomer, joining in 1985) so their rapport is well attuned at this point. Laying claim to the first Norwegian jazz to have digital life on CD with Swing de Paris, they also prove many Hot Clubs of the world are significantly more than mere cover bands. Both the HCSF and HCN demonstrate the lasting inspiration of Django Reinhardt, putting intriguing spins on his sophisticated Hot Club style.
Posted by J.B. at 8:33 AM