On-Stage: The Man in the Newspaper Hat

There can be no more problematic figure in American literature than Ezra Pound. In 1949, he became the inaugural recipient of the Bollingen Prize for poetry, administered by the Library of Congress. This proved understandably controversial at the time, given that Pound had been committed to St. Elizabeth’s mental hospital and still had a charge of treason hanging over his head. Not only was Pound unrepentant for his wartime broadcasts from Mussolini’s Italy, his work cited by the Bollingen judges contained undeniably anti-Semitic passages. Such was the vexing Pound that poet Elizabeth Bishop regularly called on as part of her unofficial duties with the Library of Congress, inspiring her poem “Visits to St. Elizabeth.” That poem in turn would inspire playwright Hayley Heaton’s The Man in the Newspaper Hat, currently running at the 45th Street Theatre.

Mad genius might be a reasonably fitting description of Pound. As the audience enters the theater, he is already on-stage working with a silent fervor that approaches the obsessive. His hospital room is clearly the product of a disordered mind, with papers strewn everywhere and writing cluttering the walls. Into this rat’s nest Bishop periodically ventures, hoping to see the latest output from one of America’s greatest modernist poets. What she usually gets is a barrage of anti-Semitic outbursts, sexually explicit insults, condescension, and paranoia.

In Heaton’s play there is no question Pound remains an unabashed Fascist sympathizer. He frequently uses hateful slurs for Jews, suggesting they are sub-human. However, the final scene paints him as a fundamentally lonely and possibly delusional man, probably humanizing him more than he deserves. He also benefits from Angus Hepburn’s riveting performance. While it is at times a showy role, Hepburn’s quiet moments fully flesh out the troublesome figure. He creates a portrait of a man of obvious intelligence, but whose idiosyncrasies have given way to obsession, perhaps even madness.

As Bishop, Anne Fizzard has a more thankless role, largely requiring her to be appalled and unnerved by Pound’s ugly rants. However, she ties it all together at the end with an effective reading of Bishop’s poem, illustrating how aptly Heaton picked up on the language and images of her verse:

“This is a boy that pats the floor
to see if the world is there, is flat,
for the widowed Jew in the newspaper hat
that dances weeping down the ward
waltzing the length of a weaving board
by the silent sailor
that hears his watch
that ticks the time
of the tedious man
that lies in the house of bedlam . . .”

While Newspaper hints at some remorse on Pound’s part, at least for his caustic treatment of Bishop, it is unlikely to radically alter opinions about the man of bedlam. He was an acknow 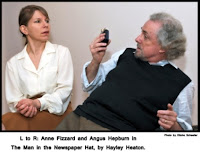 ledged giant of American letters, but that is appropriately difficult to hear in Heaton’s dialogue (of which the highly sensitive theater patrons should be strongly cautioned). Short but intense, Newspaper is a challenging look at a devilishly difficult man to take full stock of. Now open, it runs until April 1st.
Posted by J.B. at 11:13 PM