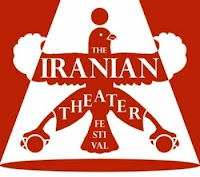 Negin Farsad has a lot of metaphors for Iran, but the “bootleg” is not one of them. That stuff is for real. Indeed, in a country she likens to America under prohibition, a dapper gent like her uncle has only one use for his bathtub. She certainly appreciated it during the return trip to Iran that inspired her one-person show Bootleg Islam, which is currently running at the Brick Theater as part of the Iranian Theater Festival.

Farsad has seen a fair amount of the world. Her cousin has pretty much seen her neighborhood. When her halfway-kinda arranged wedding brings Farsad back to Tehran, she cannot help comparing her life to her betrothed cousin. She is also a bit embarrassed by her makeshift chador. Fortunately, she has another cousin, let’s call him “elegant,” who can help her out. Surely, her uncle’s special reserves were a life saver as well.

Loving the people, but hating their regime, Farsad is not shy about tweaking the Revolutionary government. Clearly, finding herself face-to-face with a fundamentalist extremist in the late Ayatollah Khomeini’s mosque was also quite instructive in a very scary way. Still, she never makes cracks at the expense of her cousin’s more traditional faith and lifestyle.

In fact, Farsad has a good ear for material, finding a number of laughs in a country that hardly encourages that sort of thing. However, the piece might work better in spots if she slowed down a bit for a more laconic deadpan approach, rather than her consistently energetic rat-a-tat-tat delivery. Of course, cons

idering the festival’s packed schedule, the organizers are probably encouraging her to keep it as snappy as possible.

Even though her family was not directly involved in the 2009 demonstrations (a fact that did not prevent the government from temporarily imprisoning some of them) the “Green” almost-Revolution plays an important role in Farsad’s work. Throughout the performance she offers a number of spot-on analogies and brings it all full circle in a way that is surprisingly touching. It is unquestionably a show for adults though, but the bounteous penis jokes are a timely reminder that freedom is absolutely worth fighting for. One of the funnier and more endearing calls for regime change (and quite welcome as a result), Bootleg runs again this Friday (3/25) as the Iranian Theater Festival continues at the Brick, conveniently located for City residents near the Lorimar L station.
Posted by J.B. at 3:00 AM