From Refugee to Humanitarian: Pushing the Elephant

Rose Mapendo has seen the ugliest humanity has to offer, but chooses to embrace a life of forgiveness. It might be the only way she can live with the agonizing choices she made to keep her ten children alive. Mapendo’s reunion with the daughter she had been forcibly separated from forms the nucleus of Beth Davenport and Elizabeth Mandel’s Pushing the Elephant (trailer here), which airs this Tuesday on PBS’s Independent Lens.

Mapendo appears to lead a life of pleasant middle class respectability in a peaceful suburban Phoenix neighborhood. Her past was a much different story. Ensnared in the government’s round-up of Tutsis, the pregnant and recently widowed Mapendo struggled to survive with all her children, save for Nangabire, who was with her paternal grandparents at the time. As part of her pragmatic calculations, Mapendo named her twins after two of their captors, in hopes they might take an interest in their survival. She would ask much of her other children as well.

Mapendo’s stratagems worked, ultimately leading to sanctuary and citizenship in America. However, Nangabire had been left behind. Now, just as the Mapendo family becomes as whole it can be, their matriarch announces a decision to return the Democratic [sic] Republic of the Congo with her campaign on behalf of displaced people, despite her eldest son John’s considerable reservations.

Perhaps the most striking aspect of Elephant is the strength of Mapendo’s Christian faith and her determination to put it into action. She has become one of the leading advocates of refugees, particularly women and children, who are victimized by war and civil strife. Yet, it seems like she is often pressing her message on the wrong people, tirelessly addressing the UN’s governing body for refugee is 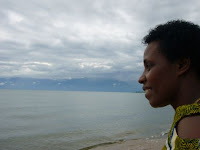 sues and affiliated NGOs. Those in attendance might be genuinely moved by Mapendo’s testimony, but they will never do anything to even mildly embarrass a UN club member like the DRC.

Davenport and Mandel clearly recognize the power of Mapendo’s story, but at times they lapse a bit into infomercialism for Mapendo’s non-profit organization. Still, Elephant is respectful, informative, and easily one of the more positive portrayals of Christianity on broadcast television this year. It airs this coming Tuesday (3/29) as part of the current season of Independent Lens.
Posted by J.B. at 7:15 AM