The Fukushima prefecture has long been one of Japan’s more economically disadvantaged areas, even before the devastating natural disasters and subsequent nuclear concerns. However, it could have been far more depressed before the earthquake hit. In the mid 1960’s, faced with the imminent closure of Iwaki’s coal mines, a small group of young women took control of their own destinies, through hula dancing. Based on their true stories, Sang-il Lee’s Hula Girls (trailer here) is a fitting selection for the Viz Cinema at New People’s special Japanese earthquake and tsunami benefit screenings today in San Francisco.

As Hula opens, Iwaki is a one-industry town. Unfortunately, the coal mine has been steadily laying-off workers and will close for good in a matter of years. Rather than adapt, the local miners’ union actively discourages any attempts to diversify the economy and provide alternate means of (safer) employment. This applies in spades to Norio Yoshimoto’s proposed Hawaiian style resort-spa. Despite the prejudices of her mother, the leader of the miners’ ladies auxiliary, Kimiko Tanikawa joins her friend Sanae Kimura as one of the first recruits for the

Hawaiian resort’s hula dancers. Of course, none of the local women knows how to hula dance, but Yoshimoto found the perfect instructor.

Madoka Hirayama is a professional dancer from Tokyo with a vaguely scandalous past and a small mountain of debt. When Iwaki calls, she reluctantly accepts. Not surprisingly, she creates quite a stir, making a decidedly strong impression on Tanikawa’s older brother. Initially, the girls are a mass of left feet, but Kimiko has real potential, which she will have to realize without the support of her mother.

Of course, Hula will be following Rocky’s triumph over adversity template, but is not the cutesy story of “plucky” girls one might expect. It resists cheap sentimentality and never whitewashes the meanness of the dancers’ circumstances. (In fact, there is a scene of domestic violence that is a bit rougher than it ought to be in a film with such obvious appeal for young girls.) Still, the young cast, particularly Yû Aoi as Tanikawa (something of a breakout role for her), is entirely charming and engaging. Ye 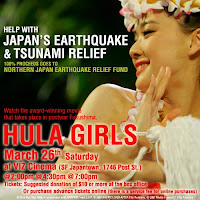 t, it is their unlikely teacher that really makes the film work. Although she eventually warms to her students, Yasuko Matsuyuki never loses her edgy attitude, which makes her glamorous character all the more attractive.

Hula is a solidly entertaining film that compares quite favorably to the somewhat thematically related but more clichéd and condescending Made in Dagenham. It is even more recommended today for everyone in the Bay Area. The Viz Theater will be donating 100% of ticket sales from three special screenings to Japanese relief efforts. Indeed, the people of Iwaki are among those who were the most directly impacted by the recent disasters. They will face economic challenges far greater than those of the mid-1960’s. You can also support the Red Cross’ efforts in Japan here and find information on the Japan Society’s upcoming (4/9) Concert for Japan here.
Posted by J.B. at 2:30 AM