Shiozawa is a sushi chef, so it makes sense he is good with a blade. That also helps in his other line of work. Most civilians think he is the proprietor of a neighborhood sushi and sake restaurant, but he also fulfills contracts for Yakuza families. He is cautious and exacting. When he takes an assignment, he is like money in the bank. However, this job might be different, because it involves accomplices. There is a chance he could get killed, but nothing can possible blow his cool in Kazuo Mori’s A Certain Killer, which screens during the Japan Society’s latest film series, Kazuo Miyagawa: Japan’s Greatest Cinematographer.

No luxury hotels for Shiozawa. Instead, he rents a grubby room in a flop house next to a cemetery (talk about appropriate). Eventually, a pretty party girl named Keiko joins him and a dour looking Yakuza named Maeda soon follows. How did he meet them and what are they doing in this de-populated post-industrial neighborhood? The flashbacks will explain all.

Essentially, Keiko was a good deed Shiozawa is still being punished for. He paid for her diner tab, sparing her the indignity of trading sex for a bowl of soup and then saved her from her abusive pimp. However, she followed him home and started worming her way into his life. Maeda also has complicated history with the hitman. Initially, he tries to hire Shiozawa’s services for a hit sanctioned by his boss, but he soon starts getting ideas of his own.

A Certain Killer is one of those films that leaves you baffled that it doesn’t have more of an international reputation. Seriously, how is it not a staple of best noir lists? This is a lithe and deadly little film that swaggers through the urban jungle like a shark swimming in the ocean. Raizo Ichikawa was known for historicals, but Shiozawa could very well be the role of his career. He has the world-weary look of nothingness, but he conveys steely grit beneath his bland, disinterested surface. There is a bit of Le Samouraï Alain Delon in him, but he is very much a disillusioned middle-aged cat.
On the other side of the spectrum, Yumiko Nogawa is all kinds of trouble as Keiko. She projects a flirty, candy-colored coquetry, but oh my, is she ever a femme fatale. Mikio Narita also holds up his end as the tightly wound Maeda. Put them all together and there is bound to be trouble. 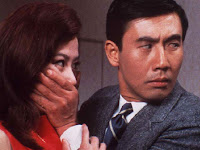 Certain Killer has all the elements in place, including the twists and narrative flashbacks of Yasuzo Masumura’s screenplay that predates so many Tarantino clones in the 1990s. However, the X-factor is Miyagawa’s distinctive cinematography, which includes a number of striking wide God’s-eye shots, reducing the characters to tiny scale (like the rats that they often are).

Seriously, why aren’t Scorsese and Tarantino constantly yammering about how we have to see A Certain Killer. Apparently, its up to us, so consider yourself duly lectured. Honestly, this is a terrific hitman thriller so take advantage of the opportunity to see it when A Certain Killer screens this Tuesday (4/17) at Japan Society, as part of Kazuo Miyagawa: Japan’s Greatest Cinematographer.
Posted by J.B. at 6:00 AM