Tribeca ’18: Freaks and Geeks, the Documentary 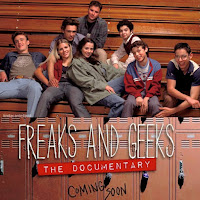 What if Brandon Tartikoff had canceled the low-rated Cheers in 1983, instead of having faith in its long-term potential? NBC would have missed out on a crucial piece of its vaunted “must-see TV” Thursday line-up. Fans of Freaks and Geeks argue that is basically what happened when their beloved but mis-scheduled show was prematurely axed. Given the subsequent success of its cast-members and the recent trend towards more complex, single-camera TV comedies, they might have a point. Cast-members and network executives reflect on the series’ inception and demise in Brent Hodge’s Freaks and Geeks, which screens during the 2018 Tribeca Film Festival.

Everyone gets a little nostalgic for the high school programs they watched during their high school years. Who doesn’t still love Happy Days, but you probably had to be there for the original 90210. Freaks and Geeks was the Square Pegs of its era. It was critically acclaimed and adored by its core audience, but it just could not catch on with a mass audience.

In retrospect, F&G’s pedigree looks sterling. It was created by Paul Feig, executive produced by Judd Apatow, and starred James Franco, Seth Rogen, Jason Segel, and Busy Philipps. Unfortunately, NBC president Garth Ancier just didn’t get it, but you have to give him credit for explaining his decisions on-camera, even though he surely knew he was appearing in front of a hostile audience.

In fact, the most interesting aspect of Hodge’s doc is the chronicle of the behind-the-scenes network politics. Frankly, anyone who just had their first pilot picked-up should watch F&G: The Doc, for perspective. Collectively, everyone associated with the show makes a convincing case for its just-ahead-of-the-curve influence on the current wave of single-camera network comedies. It is also vividly (but not necessarily nostalgically) transports us back to the last gasp of big-four network hegemony. Hodge, who also helmed The Pistol Shrimps and I Am Chris Farley has the right touch with this kind of documentary, nicely balancing the sentimental reminiscences with dishy trade-story details.

NBC might have let something big get away that could have temporarily forestalled the inevitable dominance of Netflix and Amazon over episodic television, but most people involved landed on their feet. Hodge keeps it all briskly paced and engaging, even for viewers who were not on board when the show was on the air. Recommended for fans and aspiring show-runners, Freaks and Geeks: The Documentary screens this Thursday (4/26), as part of this year’s Tribeca Film Festival.
Posted by J.B. at 10:00 AM