Tribeca ’18: The Night Eats the World 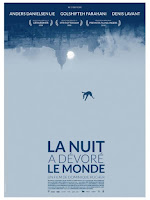 It is based on a French novel written by Martin Page under the pen name Pit Agarmen, but it is clearly constructed over the foundation of Richard Matheson’s I Am Legend. Sam, a French musician, will barricade himself in a tony apartment when a zombie apocalypse sweeps through Paris, but as he battles loneliness and hunger, he comes to realize he is the freak amid this new world of the feral undead in Dominique Rocher’s The Night Eats the World (trailer here), which screens during the 2018 Tribeca Film Festival.

You could argue Sam is fortunate to be shy and have a low tolerance for alcohol, or perhaps the exact opposite. Either way, he survives the initial wave of the zombie outbreak, because he fell asleep in a tucked away back room during his ex-girlfriend’s hipster party. Most of the zombies have been there and gone, so he fortifies a particularly nice flat in her building and digs in.

Resigning himself to the new order, Sam does his best to forage for canned goods and clear the other flats of zombies. Much like Robert Neville in I Am Legend, Sam seeks companionship with a pet, but in this case, it is a cat—and Rocher and his co-screenwriters give their relationship a subversive twist. For most of the film, his only company is Alfred, an infected tenant trapped in the building’s retro wrought-iron elevator, until the exiled Iranian actress Golshifteh Farahani makes a cameo appearance.

There are so many similarities between Night Eats and I Am Legend, both the novel and its earlier film adaptations, Rocher really should have included some sort of hat-tip, such as a Matheson movie poster. Of course, Neville was fighting vampires in Matheson’s source novel, albeit very zombie-like vampires, so Night Eats should be off the hook for any potential litigation. There is also a pronounced Gallic vibe to Rocher’s film. For instance, when Sam passes the time by constructing some Rube Goldberg like musical constructions (which actually produces some groovy sounds), the vibe is almost Tati-esque.

As Sam, Anders Danielsen Lie does heroic work, withstanding the rigor and scrutiny that comes with being on-screen nearly every second of the way. One look at his tortured countenance tells us he is a quiet on the outside but roiling on the inside kind of guy. The always striking Farahani is also deeply haunting as the mysterious Sarah. However, the wonderfully eccentric Denis Lavant (Monsieur Oscar from Holy Motors) supplies the film’s indelibly memorable and most likely iconic performance as the infected and immobilized Alfred, who just might possibly be lucid at some level deep down in his diseased psyche.

These are real zombies, who are always looking to chomp down on the infected. Rocher’s approach is admittedly more stylish and cerebral than many zombie films, but he still embraces the core principles of the genre. Rocher also composes some eerie visuals of the de-populated Parisian neighborhood and the ferocious swarms of zombie masses. Despite a relative paucity of gore, Walking Dead fans should be able to relate and approve. Enthusiastically recommended, Night Eats the World screens again today (4/22), tomorrow (4/23), and Friday (4/27), as part of this year’s Tribeca Film Festival.
Posted by J.B. at 8:00 AM