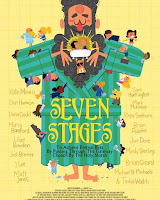 They dig their cults in LA. Just review the recent history: the Mansion Family, the Source Family, the SLA, Synanon, a satellite office of the People’s Temple, and of course, L. Ron’s Thetans. It is easy to see the cult of the Holy Storsh gaining traction here, but that is bad news for Claire and her underwhelming boyfriend Paul. They rented the apartment where Storsh shuffled off his mortal coil, so they must contend with a steady stream of cult members intending to follow his example. However, the malleable losers will adopt a policy of “if you can’t beat them, join them” in Vivieno Caldinelli’s 7 Stages to Achieve Eternal Bliss by Passing Through the Gateway Chosen by the Holy Storsh, which screens during the 2018 Tribeca Film Festival.

Claire should call her dad, because she is in a cult. To put it more accurately, she aspires to join a cult, which is sort of sad. Sadder still, her support network entirely consists of her unemployed boyfriend Paul, who is even weaker than she is. Initially, they are freaked out by the Storsh-heads who break into their flat to kill themselves after performing an absurd set of rituals, but one day Claire starts reading one of Storsh’s little red books left behind by a cultist—and suddenly it all starts to make sense to her.

Of course, she carries along the spineless Paul with her enthusiasm. Suddenly, they start ushering the Storshies into the tub and even help them take their final exit. In fact, Claire gets super enthusiastic about assisting their suicides. However, they also have to keep the detective assigned to Storsh body-processing at bay.

The first fifteen minutes or so are mildly amusing, but 7 Stages Etc., Etc. never goes above, beyond, or below the level of a sketch comedy show routine. Basically, the film plateaus at a constantly level of one-liners and carefully calibrated bits of mildly transgressive slapstick. A film about a suicidal death cult should never become formulaic and repetitive, but that is what happens here. As a further source of annoyance, Caldinelli and the producers cast a number people like Dan Harmon, whom the entertainment media are constantly telling us how funny we find their work, but have no appreciable following with real people, aside from a few dozen podcast listeners.

Frankly, Harmon is excruciatingly embarrassing as the neurotic Det. Cartwright. It is also uncomfortable for very different reasons to watch how hard Kate Micucci tries to make it work as Claire. On the other hand, Sam Huntington takes the intentionally annoying character of Paul and makes him utterly nauseating. Yet, to give credit where it is due, it is duly stipulated Taika Waititi is thoroughly and profoundly eerie as old Storshy (seen in flashbacks).

I’m sure we are all looking forward to the day when 7 Stages plays on a triple bill with Who is Harry Kellerman and Why is He Saying Those Terrible Things About Me and The Assassination of Jesse James by the Coward Robert Ford. Seriously, a ridiculously long title has to be the cheapest gag possible. In this case, its fitting. Not recommended, 7 Stages screens again this Saturday (4/28), as part of this year’s Tribeca Film Festival.
Posted by J.B. at 6:30 AM