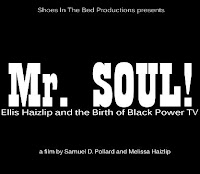 You won’t often hear this about a jazz musician, but this year, Robert Glasper is the toast of the Tribeca Film Festival. He participated in two all-star post-screening concerts, one for the soon to be reviewed Blue Note Records documentary, which prominently features him in performance and the doc-profile of African American broadcaster Haizlip and his PBS-produced variety show Soul!, which Glasper also scored. Soul! featured many jazz guests, but filmmaker (niece) Melissa Haizlip and co-director Samuel Pollard mostly focuses on, you know, soul. The music still moves and groves, but the rhetoric sounds awfully dated in Haizlip’s Mr. Soul, which screens during the 2018 Tribeca Film Festival.
Of course, there was a huge, under-served market for Soul! when it premiered on New York’s (then) NET public educational network (if you think it is hard finding an African American in the big three’s programming from this era, just try looking for an Asian). Supposedly, the idea was to do a show celebrating African American arts and culture, but politics was conspicuously high in the mix, right from the start. Perhaps that is inevitable to some extent, but when you chose up partisan sides, it makes you fair game for some hardball.

Be that as it may, it is pretty incredible how many great artists appeared on Soul!, including Max Roach, Lee Morgan, Horace Silver, Tito Puente, Mongo Santamaria, Hugh Masekela, Billy Preston, Al Green, Kool and the Gang, Ashford & Simpson, Lebelle, and Earth Wind and Fire. Yet, it wasn’t just music. Soul! often showcased modern dance, including dancers affiliated with Alvin Ailey and George Faison. There is no major network talk or variety show currently broadcasting today that gives air time to dance as a serious artform, which has truly impoverished our culture.

However, Haizlip interviewed guest like Louis Farrakhan and members of the Black Panthers, largely leaving their extremist views unchallenged. The contention Haizlip prompted Farrakhan to concede gays and lesbians (the term LGBT wasn’t yet in the lexicon) were still human beings on some basic level, but not necessarily socially acceptable, is embarrassingly underwhelming. You can get far better than that from the most conservative Evangelical clergy, without any effort. The show clearly chose a side, so they can’t act surprised when Nixon appointees declined to continue using tax dollars to produce interviews with radicalized militants. Had they also invited more conservative African Americans of the era, such as Jackie Robinson, Lionel Hampton, and George Schuyler for balance, it might have been a different story, but apparently, they didn’t.

Regardless, the music and the dance were great—then and now. In the post-screening concert, formatted in the style of a vintage Soul! episode, with musical performances alternating with interview segments, Glasper and his band laid down a strong grove backing up the acts. Alas, the Last Poets sound like relics from a bygone era, but Kyle Abraham performed some lovely choreography for Stevie Wonder’s “You and I.” However, Lalah Hathaway really lived up to the show’s name with a rousing closer that definitely upheld her soulful family tradition.

Mir. Soul! is well worth watching just to get an eye and earful of all the great artists who performed on its stage, but its racial-cultural politics are certainly debatable. An intriguing time capsule (even if it is somewhat insular in perspective), Mr. Soul! screens tonight (4/23), Wednesday (4/25), and Thursday (4/26), as part of this year’s Tribeca Film Festival.
Posted by J.B. at 6:00 AM