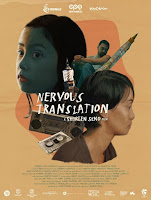 Let’s look back to the hazy mid-1980s in the Philippines. It maybe makes some of us nostalgic, either for the idealism of the People Power Revolution or the stable business climate his administration provided. Either or both seem preferable to the current Duterte chaos, but such matters are far beyond 8-year-old Yael’s scope. Her world is largely confined to her home, her school, and a few random images gleaned from television. Nevertheless, the young latch-key kid will try to make sense of her life as best she can in Shireen Seno’s Nervous Translation (trailer here), which screens during this year’s New Directors/New Films.

Little girls need their fathers, but Yael’s dad has been working in Saudi for several years straight. For some reason, it seems like only his twin brother Tino ever visits home, leaving Yael yearning for her fatherly love and her mother Val craving the attentions of a husband. As a result, the relationship between mother and daughter has grown strained. Frankly, it looks like it is all Val’s fault, but we are only seeing the story from Yael’s vantage point. Generally, that gives the film a very “child-like” perspective, but there are also brief interludes, based on some of the more outlandish images Yael sees on TV, which approximate surreal daydreams.

Jana Agoncillo is extraordinarily expressive, but also remarkably disciplined as Yael. It is a scrupulously natural and restrained performance, but it also hits the viewer directly on an emotional level. Yet, in a way, it often feels like Seno is cheating. Agoncillo and the circumstances surrounding her character are so compelling, it is almost impossible to resist investing in her. Yet, it is highly debatable just how much value Seno adds.

Obviously for the sake of irony, Val works in shoe-cobbling sweatshop, but Milo Suegeco already mined the Imelda-shoe vein quite fully in Mariquina. Angge Santos portrays Val quite forgivingly, making her distance and impatience feel acutely human, but it is still hard to fathom how easily she abrogates her parental duties.

Agonocillo’s innocence is truly heartbreaking, but the film never invites us inside or kicks it up to the next level. Instead, we just contemplate how hard Yael has had it, as the film unfolds in a slow yet uneven manner. Still, the delicacy of Seno’s directorial hand and the evocative work of her battery of cinematographers is certainly impressive. We just wish there was more to love. Inspiring highly mixed reactions (so you might just save yourself the heartache), Nervous Translation screens tomorrow (4/7) at MoMA and Sunday (4/8) at the Walter Reade, as part of ND/NF 2018.
Posted by J.B. at 3:00 AM