Close: The Latest Noomi Rapace Netflix Movie of the Week 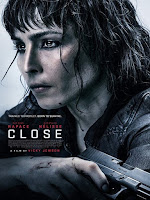 Which mining company would you expect to act more ethically, the one based in Morocco or the cronied-up firm from Beijing? It should be a no-brainer, but the Paris Hilton-esque heir to the Hassine mining empire is not helping much. Generally speaking, it is bad for the corporate image when the principal shareholder is accused of killing a cop. Rather awkwardly, it happens to be true in the case of Zoe Tanner. Granted, she was acting in self-defense, but she might not live long enough to tell her side of the story. Fortunately, she has a pesky bodyguard in Vicky Jewson’s Netflix original movie, Close (trailer here), which starts streaming this Friday.

Sam Carlson never loses a client, even when they are obnoxious brats like Tanner. She just inherited a controlling interest in the Hassine company, much to her step-mother’s shock. It is particularly galling for Rima Hassine, because her family built up the mining concern in the first place. She just might have to do something about that.

For Carlson, it is supposed to be an uneventful one-week temp gig, but she suddenly must foil a kidnapping attempt during her final night at the Hassine Casbah. Alas, they fall out of the frying pan and into the fire when a group of corrupt cops tries to finish the job. Tanner really makes a mess of things when she kills one of them, thereby making her a fugitive from justice and a major PR problem for the Hassine company, right at a time when it is competing with a Chinese firm for a major deal in Zambia. Spurned by her stepmother, the heiress can only trust Carlson, who continues her protection duties, out of professional pride and her own maternal guilt.

Somehow, Noomi Rapace has become the queen of mediocre Netflix original films, following up the mildly entertaining Bright and the ho-hum What Happened to Monday? with the competent but unremarkable Close. At least, she shows some of the grit and action chops that brought her international stardom in the original Girl with the Dragon Tattoo, but most of the time, she looks like she is on auto-pilot (and why shouldn’t she be?).

Easily the most interesting elements of Close are the character of Rima Hassine and Indira Varma performance as the aforementioned. Both are more complex than the Cinderella Stepmother viewers are initially set-up to expect. On the other hand, the entitled Zoe Tanner and Sophie Nélisse portrayal of said are like fingernails on a blackboard. Rather problematically, very little effort is made to distinguish the various thugs, assassins, and crooked coppers who densely populate the film.

Reportedly, Close was based on the experiences of real-life bodyguard Jacquie Davis, but we can only hope she is not as humorless and downbeat as Carlson. Presumably, the title is a reference to keeping close to the client, or maybe the old “keep your friends close, but your enemies closer” saying. The Moroccan locations are quite cinematic, but it is more likely to become background television than a film anyone will be compelled to give their rapt attention. Regardless, Close starts streaming this Friday (1/18) on Netflix and nobody should feel any urgency over that fact.
Posted by J.B. at 12:00 PM