Harkness’s A Discovery of Witches 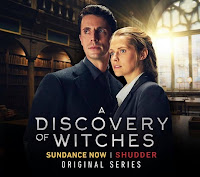 All registered users of Oxford’s Bodleian Library must take an oath promising they will never remove any volumes (or set any fires therein). Nothing in the collection should ever be lost, but an extraordinarily rare alchemical manuscript has been mysteriously missing for centuries, Yet, somehow, a visiting American scholar is able to call it up from the stacks one fine day. She happens to be a witch, but she is not adept at wielding her powers. The uncanny appearance attracts the attention of some very dangerous witches and vampires in the first season of A Discovery of Witches (trailer here), which premieres this Thursday on Sundance Now and Shudder.

Diana Bishop never thought she had much power—and what she had she struggled to contain. Nevertheless, she casually summons thee infamous “Ashmole 782” via a regular materials request. However, when she opens it, all the creatures in the vicinity of Oxford experience a major disturbance in The Force. Rather hastily, she sends it back where it came from, but it is too late. She is now on the radar of some very powerful creatures, who have been engaged in a long-running power struggle.

The two most formidable players are Matthew [de] Clairmont, an Oxford geneticist and 500-year-old vampire, and Peter Knox a sinister witch clan leader, who we quickly learn was most likely responsible for the death of Bishop’s parents. Despite Clairmont’s brooding arrogance and their “cross-species” status, romantic attraction quickly percolates between the witch and the vampire. Clairmont shifts his interest from the manuscript to protecting Bishop, but their taboo relationship raises the consternation of “The Congregation,” the shadowy group regulating the hidden world of vampires and witches (as well as the second-class demons).

Adapted from Deborah Harkness’s All Souls trilogy, Discovery is like the Underworld franchise reconceived for fans of Inspector Lewis and Inspector Morse. The first season fully exploits the Oxford locales, definitely including the cinematic Bodleian, notwithstanding its side trips to France and upstate New York. There is plenty of magic (rendered quite nicely in some quality visual effects), but the narrative is driven by ancient secrets and nefarious intrigues.

Matthew Goode is terrific as Clairmont, fluidly segueing between the aristocratic and animalistic sides of the vampire’s persona. It is some of the busy thesp’s best work since Stoker and Dancing on the Edge. Teresa Palmer develops some potent chemistry with Goode, but the passive nature of Bishop (at least at this stage in the series) might frustrate some viewers. However, there is nothing passive about the great Lindsay Duncan, upstaging everyone as the regal Yasbeau de Clermont, Clairmont’s vampire mother. Unfortunately, the villains are a bit of a mixed bag. Game of Thrones’ Owen Teale probably fares the best as the scheming Knox, but Trevor Eve (who portrayed Jonathan Harker in the Frank Langella Dracula) never looks comfortable as the ruthless vampire clan leader, Gerbert d’Aurillac.

Miami-born Juan Carlos Medina shows he has quite affinity for British supernatural-related material, following up the criminally under-rated Limehouse Golem by helming the pilot and sophomore episodes of Discovery. Veteran genre television directors Alice Troughton and Sarah Walker maintain a consistent vibe of mystery and forbidden romance. The biggest frustration is the ending, which does not feel like a logical breaking point.

Regardless, Discovery is an addictive, binge-friendly series that does not even feel like a guilty pleasure, thanks to the classy sheen (that Oxford tweed makes anything respectable). Great fun for fans of the fantastical (even if they are not familiar with Harkness’s source novels), A Discovery of Witches starts streaming this Thursday (1/17) on both Shudder and Sundance Now.
Posted by J.B. at 6:00 AM