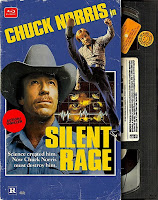 It is Walker, Texas Ranger and Deputy Flounder versus the Wolverine from Hell. Chuck Norris, the man who never loses a fight takes on a killer who can never die and the results are pure 1980s—early ‘80s, in fact. Fittingly, Michael Miller’s Silent Rage (trailer here) releases today as one of Mill Creek Entertainment’s new retro-VHS-packaged BluRay releases.

Twitchy John Kirby just killed the other residents of his halfway house, so it is probably safe to assume the medical experiment using him as a guinea pig was a total failure. Sheriff Dan Stevens is pretty sure his deputies mowed him down with a sufficient hail of bullets, but his doctors discover he still has some life left in him. Dr. Tom Halman is the responsible one, so he wants to pull the plug, but Dr. Phillip Spires is determined to keep pumping him full of lightning, like Colin Clive in the original Frankenstein movies. Unfortunately, it works only too well, stimulating superhuman powers of healing and regeneration.

As it turns out, Stevens’ ex is Halman’s sister Alison, who cannot help falling for the Sheriff’s cocky charm when they run into each other in the hospital. Stevens will be busy rousting bikers, putting the moves on Ms. Halman, and mentoring his schlubby Deputy Charlie, while Kirby runs amok in the hospital.

Okay, there is no point in denying the first act is awkward and surprisingly pokey. Still, Rage is just a cornucopia of weird connections and trivial claims to fame. First and foremost, Norris credits/blames this film for his reluctance to do love scenes in his future films. His uncomfortable looking love interest is played by Toni Kalem, the future Mrs. “Big P” in The Sopranos, who succumbs to his muskiness while the turntable plays a cheesy pop ballad sung by Katey Sagal, the future Peg Bundy.

Believe it or not, Norris has some decent buddy chemistry with Stephen Furst, who everyone knows best as Kent “Flounder” Dorfman in Animal House. The late, great Ron Silver is about as charismatic as anyone possible could be as the too-ethical-to-live-long Halman. As an added bonus, William Finley (cult-famous for his appearances in the films of Brian De Palma and Tobe Hooper) adds some weirdness as Dr. Paul Vaughn, the scaredy-cat third scientist poking and probing Kirby.

There are a couple of entertaining fight scenes in Rage, but it just isn’t at the level of his other pre-Cannon, post-Golden Harvest action classics. Still, it is a total cinematic time capsule, especially with Mill Creek’s old school packaging. Plus, it is always great fun to watch a young Chuck Norris throw-down. Honestly, he looks very much like he did when he went toe-to-toe with Bruce Lee in the Roman Colosseum during the climax of Way of the Dragon. You just can’t beat this kind of nostalgia. Recommended for fans of early 1980s genre films, the special BluRay edition of Silent Rage is now on-sale, from Mill Creek Entertainment.
Posted by J.B. at 3:00 AM