It was like the Court TV and legal reality shows of the 1930s, but none of it was true. The Moscow Show Trials were a propaganda spectacle that had nothing to do with justice (or truth). Prolific documentarian Sergei Loznitsa whittles eleven days of archival footage recordings of the so-called “Industrial Party Trial” down to a one hundred twenty-some minute found footage documentary in The Trial (trailer here), which screens during this year’s First Look at MoMI.

In late 1930, a group of engineers and economists dubbed “The Wreckers” were put on trial for economic sabotage, scapegoating them for the Soviet Union’s dismal economic performance. Aside from the names and employment history of the accused, not one single truthful word was uttered during the proceeding. It was all a fabrication—every word and every syllable. Yet, the accused duly confessed to the charges leveled against them. Some had surely been worked over by the OGPU (an earlier forerunner of the KGB), whereas others perhaps confessed due to psychological pressure and a perverse sense of loyalty, like Rubashov in Arthur Koestler’s Darkness at Noon.

Even though The Trial only presents events that were deliberately staged for public consumption, it vividly illustrates how the Soviet legal system was designed to crush the spirit of the accused. Frankly, we would have confessed to anything to stop the constant, soul-deadening repetition of charges against the alleged “Industrial Party” members. Yet, that is definitely part of the “Big Lie” strategy employed by the Soviets. It is also rather disconcerting to the pre-approved spontaneous demonstrations against the accused playing out on the streets outside 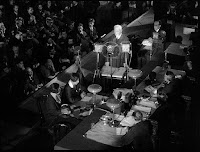 Rather ominously, The Trial is only too relevant in the modern day and age. Although the Russian Neo-Soviet regime has conducted secret trials of abducted Ukrainian nationals, like filmmaker Oleg Sentsov, the outcome is just as rigged as Moscow Show Trials. It was not pretty, yet in some cases, the ultimate fate of several “Industrial Party Members” remains unknown.

The Trial can be difficult to watch, for both aesthetic and humanistic reasons. However, Loznitsa’s meticulous craftsmanship is quite impressive. Viewers who fight their way through to the finish will glean a deeper understanding the machinery and propaganda of oppressive regimes. Obviously, The Trial is an acutely timely film, in a depressing second-verse-same-as-the-first kind of way, but it is also fascinating to see the images of the early Soviet era echo and reverberate over time. Recommended for hardy, free-thinking cineastes, The Trial screens this Saturday (1/12), as part of First Look at MoMI.
Posted by J.B. at 8:00 AM