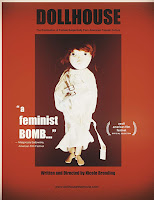 Prepare for a lesson in women’s and media studies from a pack of Spitting Image-style puppets. Frankly, the puppet known as Junie Spoons probably has as much personality as the pop starlets she is satirizing. Her dramatic cautionary tale of woe unfolds in a phony Behind the Music-like gossip show that serves as the narrative artifice of Nicole Brending’s Dollhouse: The Eradication of Female Subjectivity from American Culture (clip here), which premiered during the 2019 Slamdance Film Festival.

You more-or-less know her story. Spoons started out as the star of an innocent child’s variety program, but as her star rose, she incorporated increasingly risqué elements into her solo act. She became a major star, but after her somewhat less famous co-star (and love of her life) dumped her, she started abusing drugs, alcohol, and himbos.

The scummy men and substance abuse issues could have been endured by any number of hot mess pop idols. However, Spoons has one legal challenge wholly unique to her, but ironically, it might just cost the support of the hyper-sensitive social justice warriors Brending’s film is probably counting on.

In a rather surreal turn of events, Spoons must lawyer-up and litigate to maintain her identity when a white trash loser decides deep down he really is Junie Spoons and must transition genders in order to become who is really is. Alas, Spoons’ legal battle will cost her greatly.

During the first forty-five minutes or so, Dollhouse charts a safe, feminist tack. However, the third act holds implications that might offend the professionally offended, with respects to it handling of transgender issues—so best of luck to Brending.

For the most part, Dollhouse is mildly amusing, but only an inch deep. Basically, she milks as many chuckles as she can from the spectacle of puppets behaving badly. If the art of cinema peaked for you with the vomiting scene in Team America: World Police than this film is your huckleberry. At least it has the merit of brevity, clocking in under 70 minutes. Just kind of whatever, Dollhouse: The Eradication of Female Subjectivity from American Culture (say that one-time fast) screens again Monday (1/28) during this year’s Slamdance in Park City.
Posted by J.B. at 7:00 AM