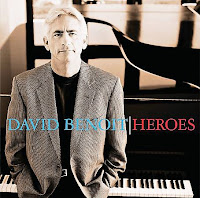 Paying tribute to those who came before you is jazz tradition worthy of continued observance. It preserves the sense of ancestral veneration and apostolic succession unique to jazz. David Benoit’s Heroes is the second so-titled piano tribute CD I have heard in recent years, the first coming from Roger Kellaway. While Benoit’s is sure to receive more attention because of the oftentimes smoothish artist’s greater commercial stature, it is also more likely to face a more grudging critical reception form the same reason, even though both Heroes essentially come from the same place with the same motivation.

Benoit starts with Dave Grusin’s “Mountain Dance,” arguably a classic of contemporary-crossover jazz, wisely hewing close to the sparkling original melody. There are a few of those chime-like smooth jazz flourishes throughout Heroes, but they do not sound out of place here. Benoit’s interpretation of “Human Nature,” made famous by Michael Jackson is also reasonably credible, but the smooth jazz sweetenings are distracting and R&B backbeat gets obtrusive.

The pop covers continue with Elton John’s “Your Song.” The leader turns in an elegant solo, but the rendition still falls short of Pietro Tonolo’s recent version with Gil Goldstein and Steve Swallow. The Doors’ “Light My Fire” is probably the most successful pop song of the outing, benefiting from some Latin percussion and a solo from the leader that digs down into the funk bag.

In his liner notes, Benoit identifies Horace Silver’s “Song for My Father” as “the first jazz tune I learned by ear,’ and his affection for it is still apparent in an arrangement faithful to the original. When Benoit has periodically taken breaks from more commercial work for straighter jazz projects, Bill Evans has usually somehow been an inspiration, and that is true on Heroes as well. A lithe but sensitive swinger, “Waltz for Debbie” might be his finest keyboard work of the session.

The sole original of the set is “A Twisted Little Etude,” a tribute to Dave Brubeck that serves as a prelude to “Blue Rondo a la Turk.” It swings pretty hard, featuring a groovy guest spot for Andy Suzuki on alto and brief echoes of Joe Morello’s classic “Take Five” solo from drummer Jamey Tate. Suzuki stays for “Rondo,” giving it an edgier sound than typically heard.

While Heroes is somewhat uneven, there is a certain logic to its inconsistency, with the jazz tunes sounding jazzy and the pop tunes poppish (to varying degrees). The second half is clearly the strongest, with Benoit showing legit jazz chops while paying homage to the likes of Silver, Evans, and Brubeck, for which he deserves some credit, particularly if he can bring more ears to these artists.
Posted by J.B. at 8:25 AM