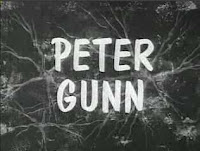 Although Hollywood never really embraced jazz, it did find its way into many film noir pictures, signifying the sultry dangers of the urban underworld. Not surprisingly then, it also underscored some late 1950’s television detective shows, samples of which are screening at the MoMA as part of the Jazz Score retrospective.

Probably the best known and most successful example of the jazz-scored television series was Peter Gunn (NBC 1958-1961). Featuring Henry Mancini themes performed by top West Coast jazz artists, Gunn (sample opening here) dedicated a relatively large portion of its brief twenty-four minutes to music. For instance, in “The Comic,” the episode MoMA selected, trumpeter Pete Candoli gets about a minute of screen time for a solo and a brief speaking part. In another episode, “Keep Smiling,” Shelley Manne and His Men, including Joe Gordon and Herb Geller, get about a minute and a half for a complete breakneck number. Also, Gunn’s girlfriend Edie Hart, played by Lola Albright, is frequently heard crooning at Mother’s nightclub.

Gunn’s plots were simple due to time constraints. They usually involved Gunn, played by the square-jawed Craig Stevens, getting knocked unconscious by accomplices of the criminal he was tailing, only to be saved at the last minute by Lt. Jacoby, whose officers followed him, hoping to be lead straight to the perp. However, the show had a very stylishly noir look, nicely directed, usually by either series creator Blake Edwards or veteran television director Boris Sagal.

Less successful, Johnny Staccato (NBC 1959-1960) is often considered an imitation of Gunn, but it had it moments. Starring John Cassavetes as the title character, a former jazz pianist turned P.I., Staccato might have been moodier than Gunn, but it had similar elements. In this case, the jazz influenced composer was Elmer Bernstein, and the setting was Waldo’s jazz club. West coast jazz artists were also frequently heard in the background, as in “The Naked Truth,” where the house band included Candoli again, with guitarist Barney Kessel, Shelley Manne on drums, and Red Norvo on vibes.

The real oddball in the Jazz Score program is Blues for Trumpet and Koto, a one-hour stand-alone television drama, starring Quincy Jones as himself and inexplicably featuring performances by Al Hirt and his Dixieland combo. Jones is preparing for a Japanese tour and essentially shanghais his old lovesick compatriot Peter Clay to write special arrangements for the event, including the title piece. There are some pretty swinging big band performances of standards like “Night in Tunisia” and Clay’s special composition, from what appears to be Nobuo Hara’s Sharps and Flats, augmented with some members of Q’s big band.

Unfortunately, the acting and story brought forth forgivably audible groans from the audience. Anthony George would have a long career in television on series like Dark Shadows (he also had a supporting role in Otto Preminger’s Where the Sidewalk Ends with Craig Stevens), but he is frankly terrible as Clay, and his vocal number, which was barely more than the Rex Harrison-style speaking on pitch, was a complete mistake. For his part, Jones appears to have come out of the Burt Reynolds show -the-audience-how-much-fun-you’re-having school of acting. Still, it is a true rarity with some appealing big band music that is unlikely to turn up on DVD or cable anytime soon.

Altogether, this Jazz Score program represents a decent selection of jazz television scoring. Probably, the most notable omission was Mr. Broadway (opening credits here), which featured some great Dave Brubeck themes, but also starred Stevens as Broadway press agent Mike Bell, so it might have seemed too similar to Gunn. Also, the short-lived car-racing series Straightaway, was all but unwatchable, but featured the music of Maynard Ferguson’s band at height of its power. Of what MoMA did program, Gunn and Staccato hold up reasonably well as noir entertainment, and the novelty of Koto is at least worth a look. They screen together again on Sunday.
Posted by J.B. at 3:40 AM