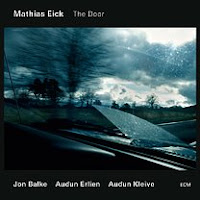 A debut release should be a happy occasion, but in this case it is also a reminder of something lost. At the 2007 IAJE convention, Norwegian Mathias Eick was awarded the IJFO International Jazz Award for New Talent, and performed the best concert of the show. Sadly, there will be no more IAJEs, but as consolation, his initial outing as a leader, The Door, releases today from ECM.

The opening title track is a good indication of the deceptive nature of Eick’s music. It starts as an open, spacious vehicle for the leader’s lyrical trumpet, but the rhythm section subtly locks in, until drummer Audun Kleive kicks the intensity up to a crescendo, only to fall off for a brief mournful coda from Eick.

Simultaneously stately and moody, “Cologne Blues” benefits from the supportive aural textures added by Stian Carstensen on pedal steel guitar, an instrument rarely heard in jazz aside from Buddy Emmons’ dabblings outside of his Nashville sessions. Together with Kleive’s spooky percussive accents and an inventively structured solo from Jon Balke on piano, it is an intriguing track. It also shows Eick’s range, from breathy vibrato to strong clarion high notes.

Having penned each track on The Door, Eick shows a tremendous facility for melody, like the hypnotically catchy “October,” which inspires a surprisingly swinging solo from Balke. Eick skips a month, following it with the impressionistically lovely “December,” a remarkably accessible example of jazz trumpet that should woe fans of Enrico Rava, Tomasz Stanko, and maybe even late pre-electric Miles.

“Williamsburg” is another haunting melody, but it never flags in energy, thanks to the strong pulse laid down by the rhythm section, particularly bassist Audun Erlien. It might feature Door’s strongest solo flights from Eick and Balke, again cutting loose for a playfully swing-centered statement.

With The Door, Eick suggests dualistic rhetoric: spacious yet rhythmic, lyric yet forceful, Nordic cool but swinging. It is a session that really pulls you in on initial listening, and then stays in heavy rotation in the CD changer. It turns out IAJE may not have been good with money (to say the least), but they did have good judgment in other areas. The Door represents a great start fulfilling the promise of Eick’s auspicious American debut at their final New York show.
Posted by J.B. at 3:29 AM