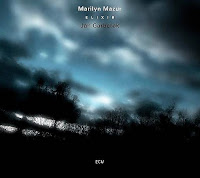 Someone once dubbed Miles Davis’s surviving sidemen “the Sons of Miles,” but where would that leave Marilyn Mazur, who played on the trumpeter’s arguably last great recording, Aura, and toured with him for nearly half a decade? Basically, doing her thing, with musicians of the caliber of Gil Evans, Eberhard Weber, and Jan Garbarek, with whom she recorded Elixir, a set of solo and duet performances, for her percussion and his reeds.

With the opening track, “Clear,” Mazur establishes the mysterious nature of the music to follow, but Garbarek’s tenor is surprisingly warm and tender. Indeed, her percussion seems to propel him towards some of his most explicitly jazz sounding performances of recent years. Mazur supplies “Dunun Song” a strong groove that has Garbarek swinging surprisingly hard on tenor. “Joy Chant” is even more upbeat, with bright tonal colors produced by Garbarek’s soprano and Mazur’s percussive accoutrements, sounding almost like a steel pan drum here.

Mazur and Garabarek cover quite a bit of ground in their varied set. “Mountain Breath” is a brief exotic pastoral for flute, whereas “Totem Dance” is a hypnotic trance-dance. With Garbarek on tenor, it almost suggests some of Charles Lloyd’s more mystical music. Only “Winter Wish,” another tenor feature, has the sort of austere, Nordic vibe one might expect of a Garbarek session on ECM. Mazur has played on a number of the Norwegian reedman’s sessions, which evidently has led to a musical empathy of a very high order. They sound perfectly in-synch throughout Elixir, conveying an easy, unforced manner.

Mazur’s percussion solos interspersed throughout Elixir are quite evocative and even melodic. Pieces like “Metal Dew,” “Mother Drum,” and “Creature Walk” have a strong rhythmic pulse that is easy to get caught up in. Whereas, improvisations like “Sheep Dream” and “The Siren in the Well” eerily suggest scenes of nature at night.

Loose and improvisational, Elixir still holds together quite cohesively. While spacious and moody, it should not be dismissed as experimental or self-consciously intellectual. Indeed, Mazur and Garbarek often produce the joyful sounds of an accessible brand of jazz.
Posted by J.B. at 3:11 AM