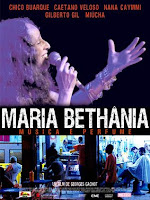 Dr. House and Caetano Veloso are both fans of Maria Bethânia. At one point, House M.D. used her “Fera Ferida” on the show’s soundtrack (but it is not on the official CD release). Veloso has worked with Bethânia since their earliest years—he happens to be her older brother. In fact, it was he who renamed her after a popular romantic ballad of the time. Veloso tells that story as one of several giants of Brazilian music paying tribute to Bethânia in Maria Bethânia: Music is Perfume (trailer here), opening today in New York.

Bethânia’s career has moved through distinct phases. Once known for decidedly political material, she became an interpreter of unapologetically romantic Brazilian popular song in the 1980’s. Despite the stylistic change, she remains committed to the song’s integrity. She now largely prefers simple, direct arrangements which best suit the material. Of a song of innocent flirtation she explains: “It’s a light-hearted song. Like a conversation between friends. . . Taking it too seriously, adding strings and so on, might make it a bit . . . corny.”

Her repertoire, as reflected in Perfume, does not completely ignore material of social significance. Probably her most effective performance in the film is of a song which directly links Brazilian music with the Middle Passage ordeal, as she sings (in Portuguese): “The drumming waves of night taught me to sing.”

In interview segments we hear from some of the most prominent names in Brazilian music, including Gilberto Gil, Chico Buarque, and as one would expect, Veloso, who even plays a brief rendition of “Maria Bethânia.” We also hear her joined in concert by Nana Caymmi and Miucha, a past collaborator with Antonio Carlos Jobim and Vinicius de Moraes.

While Bethânia’s musical director Jaime Alem will use an element here and there borrowed from jazz, it not part of an over-riding concept beyond the simple goal of finding what best serves the music. Beth

ânia’s first big hit was in fact a samba, which she often returns to, most notably with “Samba de Benção,” a song that appeals to her Bahia pride. Still, the overall vibe of Bethânia’s music is that of the popular and often traditional love song, delivered in a decidedly intimate style.

As captured by director Georges Gachot, Bethânia seems very down-to-earth. Several times she talks about the simple pleasures of a nice cold beer. She also obviously maintains strong relationships with her family, including Veloso and their mother, nonagenarian matriarch Dona Caro.

As a film Perfume is pleasant enough, if small in scope. While Bethânia might have started her career as a firebrand, the film entirely avoids any political controversies. While she doubtless has very definite opinions on the state of the world, the film focuses almost all its attentions on her music, which really is the best way to present an artist. It starts its New York run today at the Pioneer with Youssou N’Dour: Return to Gorée (separate admissions), which would probably be somewhat more interesting to jazz audiences than the delicate lyricism of Bethânia’s vocals. Still, Perfume is certainly an effective introduction for general audiences to a major Brazilian artist.
Posted by J.B. at 3:30 AM