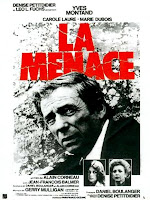 If you have seen Wages of Fear, you know there will be trouble whenever Yves Montand gets behind the wheel of a big rig. In Alain Corneau’s Le Menace, the big trucks come accompanied by a deadly love triangle and a nifty jazz score by Gerry Mulligan, which is why it is screening as part of MoMA’s Jazz Score film series.

Henri Savin might be considered a man of the world. A French trucking manager with an extra lover and sketchy past, he does not have much faith in the law. Savin has broken off his affair with Dominique Montlaur, the owner of his trucking firm which bears her name, but she refuses to accept that it is over. In desperation, she ambushes Julie Manet, Savin’s pregnant younger lover, first attempting bribery, than resorting to physical violence in hopes of running her off. When all else fails, she does a header off a cliff, inadvertently creating serious trouble for Savin and her rival—a measure of revenge she would not live to savor.

As the police investigate her death, suspicion falls on Manet, the last person to see Montlaur alive. When Savin’s advice of denial lands her behind bars facing a murder rap, Savin takes it on himself to clear her name, by framing himself. He has no intention of sacrificing himself though, expecting to flee to his old Canadian stomping grounds once he has finished manipulating the plodding coppers. While in France, Menace follows in the tradition of Clouzot thrillers like Diabolique, but when it moves to Canada, it veers into Duel territory. Let’s just say this is indeed a film about big trucks.

The effect of Mulligan’s rich, warm baritone saxophone underscoring the sight of Savin’s eighteen-wheeler rumbling over the open road is surprisingly effective, giving a lush 70’s feel to the film, in the best sense. Mulligan composed the score during what was considered his fusion period, due to his use of moog and synthesizer effects. Compared with much of the era’s music though, his score is still relatively straight-ahead jazz.

Dave Grusin, no stranger himself to soundtrack work (Three Days of the Condor, The Firm), provided an organizational assist and is heard on keys throughout. Jay Leonhart and Jack Six shared t

he bass duties, joining either Bobby Rosengarden or Michael DiPasqua on drums, with various keyboard players augmenting the ensemble. The soundtrack, together with unused themes, was issued under the title Watching & Waiting, which holds up well when heard apart from the film’s visuals.

Menace is the sort of naturalistic crime drama European filmmakers used to excel at. It might have benefited from a little tightening (and the slip-shod subtitles do not do it any favors), but over all, Menace is a clever film, well served both by Mulligan’s music, as well as Corneau’s judicious use of silence. It screens again on Monday.
Posted by J.B. at 8:05 AM