Before he was infamously fired by the Nikkatsu studio, director Seijun Suzuki brought an avant-garde auteur’s sensibility to the Japanese yakuza B-movie. While in today’s world, Suzuki can be considered an ironic godfather of Miike and Tarantino, in 1967 his films just seemed weird, particularly his masterwork, Branded to Kill. Now some forty years after Suzuki’s story of a rice-sniffing assassin irrevocably severed his studio ties, Patrick Harrison has adapted Branded for the stage as Butterfly, Butterfly, Kill Kill Kill! in a Depth Charge production now running at the Brick Theater as part of Fight Fest—a theatrical festival dedicated to the art of fight choreography.

As a yakuza story, there is indeed a fair amount of fighting and gunplay in BBKKK, but there is relatively little blood. However, the cast still makes quite a mess during the production (though to be fair, they try to clean up after themselves). Hanada, the yakuza’s Number Three ranked assassin, has a bizarre rice fetish. His wife Mami is a nymphomaniac. End result: an awful lot of rice ends up strewn across the stage.

If Branded’s story seemed a bit strange on film, it is downright trippy on stage. Essentially, Hanada gets tangled up with femme fatale Misako, who hires him for an impossible job. Hanada finds himself taking out a number of his competitors, but the mysterious Number One seems to have the drop on him. Of course, it is all just a vehicle for some on-stage lunacy that satirizes pretentious performance art theater as much as it lampoons yakuza conventions.

Incorporating all sorts of visual gags, and some very hip music, including free bass and drum improvisations from Dave Harrington and Samer Ghadry, BBKKK is definitely entertaining in a subversive “gee they’re actually doing this on-stage” kind of way. Devotees of the original Suzuki source material should also appreciate the clever ways in which Harrison incorporates signature elements of the film into the stage production, like a five minute flying bullet slo-mo sequence and the use of a vintage film projector showing clips of the seductive Misako in jeopardy. 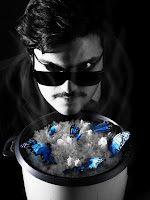 The entire cast is undeniably energetic and suitably uninhibited as they reanimate Suzuki’s distinctive gangster opus. Harrison shows a particular comedic flair as Hanada and his direction keeps the madness well paced and relatively orderly. As Mami, Alexandra Hellquist also deserves credit for her fearless work in some of BBKKK’s most outrageous scenes, like a hilariously crazed rice-fueled simulated sex scene.

Though BBKKK has a somewhat short running time (announced at thirty-five minutes but a bit longer Wednesday night), it is clear a lot of inspiration went into its production. Adam Scott Mazer and Ian Picco’s fight direction is certainly appropriate to the festival while staying true to the eccentric spirit of the show. Harrington’s music, both pre-recorded and improvised, sounds great throughout, while Nancy Kwon’s film design adds the perfect retro-surreal look. For those who enjoy chaos and carnage on-stage (and what’s not to like about that?) BBKKK is a lot of fun. It runs again during Fight Fest this Saturday (12/12) and Sunday (12/13).