In late Czarist Russia the Ranevsky estate must be sold to save the family from bankruptcy. Class, tradition, and manners all figure prominently in Anton Chekhov’s The Cherry Orchard, but they are all trumped by the threat posed by the homicidal ninja terrorizing the family in a new adaptation by Michael Gardner that might take a few liberties with the original source play. Indeed, for sheer body count it will be hard to top writer-director Gardner’s The Ninja Cherry Orchard, now running as part of Fight Festival (a celebration of stage fight choreography at the Brick Theater in Williamsburg).

There is indeed a cherry orchard that really ought to be sold to pay off the Ranevsky debts. They are reluctant to sell though, because the Ninja Cherry Orchard has always been a significant source of family pride and a permanent connection to Russian history. However, they ought to clear cut it, since the orchard is also the source of the Ninja’s power. As in the original, NCO opens with the Ranevskies’ emotional homecoming from Paris. They are met by a family friend, Ermolai Lopakhin, a former peasant who is now a wealthy merchant. Lopakhin has a plan for saving the estate, but it hardly matters, because when the Ninja shows up, all bets are off.

Not to give anything away, but do not get too attached to any particular characters, except perhaps Fiers, the old footman, who emerges as the secret Kung Fu master who has the key to destroying the Ninja. What follows plays out like the martial arts fantasy of an adolescent boy bored to death with a stuffy production of Chekhov. At first the audience will wonder how long the troupe can keep the joke going, but it soon becomes apparent they can maintain the inspired lunacy all night.

NCO is a riotous, over-the-top theatrical experience that gleefully defies traditional critical criteria. (Frankly, I laughed like a simple-minded idiot the entire time.) Still, it deserves credit for mounting a ve 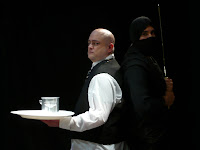 Featuring many elaborate martial arts sequences NCO is exactly what Fight Fest is all about. It is also unapologetically funny. Ultimately, NCO is just a great time at the theater. Fight Fest continues at the Brick through December 20th, while the madly entertaining NCO has been extended past the festival, with an additional four performances scheduled for January 7th to the 10th.
Posted by J.B. at 8:00 AM