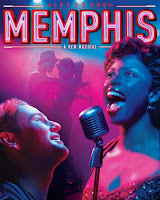 The lily white Huey Calhoun has his faults, but he is not trying to appropriate the music of Memphis’s rhythm & blues musicians. While plenty of other people in the music business will be only too willing to do so, all Calhoun wants to steal is the heart of Felicia, a Beale Street diva. In late 1950’s-early 1960’s Memphis, that just cannot happen. At least he can love the music in Memphis, a dynamic new book musical now running on Broadway.

Calhoun is one of the few white residents of Memphis who is either gutsy or innocent enough to frequent the African American clubs on Beale Street. While his presence makes club owner Delray understandably uneasy, everyone generally accepts the goofy kid because of his obvious affinity for their music. A big talker, he promises to get Delray’s sister Felicia on a major Memphis radio station. Commandeering the broadcast booth of the station owned by the upright and uptight Mr. Simmons, Calhoun lights up the proverbial phone lines spinning R&B for appreciative white teenagers. Suddenly, Calhoun has a steady job.

For a while, Calhoun actually has it all, including a relationship with Felicia. Yet he just does not understand how things really work in Memphis, whereas Felicia is all too aware of reality. Although their love might be impossible in that specific time and place, their music is sound of the future and it is catchy indeed.

Though the score by David Bryan (best known as a member of Bon Jovi, but also the composer of the Toxic Avenger musical) is a bit more orchestrated and well, Broadway-sounding than the genuine R&B and rock & roll of the period, it really delivers the goods. “Someday,” Felicia’s first hit in the context of the show, really does sound like it could have been a chart-topper, perhaps for Etta James. Ironically, one of the show’s highlight comes from Derrick Baskin as the mostly silent Gator, who blows everyone away with “Say a Prayer,” the riveting first act closer. However, the standout song is arguably Calhoun’s feature, “Memphis Lives in Me.” It is actually a twofer: musically it is a showstopper, but it also explains Calhoun’s character better than any of the previous dialogue. It would not be surprising if the city of Memphis adopted as their unofficial anthem in the near future.

True, Joe DiPietro’s book is not exactly the most original treatment of themes and issues that drive Memphis. Of course, clichés become clichés because they work, and audiences will most likely find themselves charmed by Memphis’s likable and vocally talented leads. Frankly, Chad Kimball’s weird affected, nasally accent does not sound at all like Memphis, but his energy and powerful singing voice more than compensates. Montego Glover ta

Memphis boasts far more memorable songs than most of its Broadway competition, which is the ultimate measure of a musical. Slickly produced and tightly paced, Memphis looks great and sounds soulful. Now running at the Shubert Theatre, it is a spirited show, definitely recommended for R&B listeners and book musical patrons.
Posted by J.B. at 2:00 PM