Romanian Film Festival ’09: The Other Irene 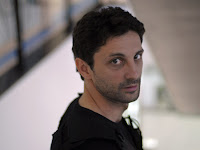 Given the growing awareness of human trafficking in some south eastern European countries, one can absolutely understand a Romanian husband’s reluctance to let his wife take a temp job in Cairo. While Aurel is overly-cautious by nature, it turns out his apprehensions are well founded in Andrei Gruzsniczki’s naturalistic thriller The Other Irene, which had its American premiere at this year’s Romanian Film Festival.

An average working class guy, Aurel’s attractive wife Irene should have been well out of his league. Though more comfortable in the countryside, Aurel works as a security guard in a Bucharest shopping mall to please her. Ambitious and impulsive, Irene wants a more glamorous life and sees a high-paying contract job with her Middle Eastern company as a means to that end. Despite Aurel’s trepidations, she eventually returns apparently safe and sound. However, she now seems to nag poor dopey Aurel more than ever. Soon she accepts a second Cairo assignment, but this time she is not coming back—alive.

Suddenly, Aurel’s formerly workaday existence takes a Kafkaesque turn. Irene is supposedly dead, but nobody will give him a straight answer beyond that. The stories from Irene’s employment agency, the Romanian Foreign Office and the Egyptian consulate do not seem to jibe, but no one will take his objections seriously. Strangely, even his diplomatic countrymen do not seem particularly alarmed when a Romanian national dies under mysterious circumstances, perhaps because they hope to avoid the extra paperwork. Communism might be gone, but evidently bureaucrats are still bureaucrats.

Gruzsniczki and cinematographer-producer Vivi Dragan Vasile create a moody twilight environment where the Aurels of world are powerless in the face of injustice. In fact, the film is more an exercise in existential soul searching than a thriller per se. Indeed, Gruzsniczki and his co-screenwriters, Ileana Muntean and Mircea Staiculescu, seem to posit the impossibility of ever truly knowing someone, regardless of the intimacy of a relationship.

As Aurel, Andi Vasluianu carries the film with a quiet intensity that is quite noteworthy. However, Gruzsniczki is arguably too successful crafting his fatalistic milieu. There is no comic relief or anything 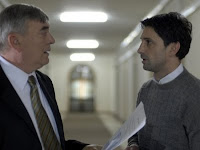 else which might be a leavening influence on Irene’s unremittingly grim tone. As a result, though certainly effective, the film can be an exhausting viewing experience.

Reportedly based on a true story, Irene is an impressive example of Romanian cinema, but it is not the sort of film that invites repeated viewings. It was definitely a worthy selection of this year’s Romanian Film Festival, which based on unscientific observations, saw a marked increase in attendance this year.
Posted by J.B. at 2:15 AM